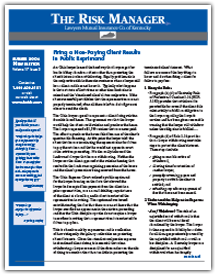 I have seen several recent cases concerning communications with a client or opposing party that highlight the potential bar complaints, malpractice claims and litigation expenses that are easily avoided if only the lawyer will communicate with the right person.

In one case a lawyer prepared a lawsuit and was prepared to file it because he couldn’t get the opposing party, a state agency, to respond to his requests for assistance. The lawyer wrote, phoned, and e-mailed the state agency head in an attempt to remedy the issue for his client. The state agency head refused to respond to the letter, phone call, or the accompanying e-mail. After the lawyer concluded he wasn’t going to get a response from the state agency head, in a last ditch effort to avoid litigation he e-mailed a copy of the complaint to the general counsel for the agency informing him that the suit would be filed in three days. Within hours he received a response from the agency’s general counsel and a remedy for his client. The lawsuit was avoided -- the general counsel saved his client (and Kentucky taxpayers) costly and embarrassing litigation simply by returning a phone call his client recklessly ignored.

I wonder how many times lawyers, state agency personnel, and clients refuse to answer their mail or return phone calls thereby forcing the filing of lawsuits or complaints that easily could have been avoided by a timely response. Develop some “bedside manner,” always return calls, respond to mail promptly, and be sure to communicate with the right person.

Another recent case involves a lawyer that failed to communicate an offer of settlement to her clients. It is claimed that a new offer of settlement of some 30 million dollars was made to a lawyer representing multiple clients numbering in the hundreds. The lawyer immediately rejected the offer without advising her clients, thus risking a malpractice claim.

The Commentary to SCR 3.130(1.4 Communication) covers the duty of a lawyer to pass on offers of settlement to a client:

“... A lawyer who receives from opposing counsel an offer of settlement in a civil controversy or a proffered plea bargain in a criminal case should promptly inform the client of its substance unless prior discussions with the client have left it clear that the proposal will be unacceptable. See Rule 1.2(a)....”

I have seen instances in mediations when the mediator relays a new offer of settlement from one party to another, and the receiving attorney rejects it without passing it on to the client. While it is possible that the client has specifically instructed the lawyer to reject any new offers, unless this has been done, the lawyer who rejects a new offer without consulting with his client is at risk for a bar complaint and a malpractice claim.

By the way, don’t forget that in Kentucky a lawyer must have actual authority to agree to a settlement for a client – another reason why all settlement offers must be communicated to a client unless the lawyer has specific client instructions covering the offer. See Clark v. Burden, Ky., 917 S.W.2d 574 (1996) that held that Kentucky lawyers do not have apparent authority to settle client suits. They must have actual authority.