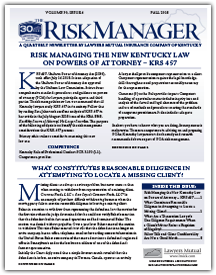 One of the many ways the Internet and social media have changed the practice of law is the increased risk of assisting a client’s illegal act. Scams targeting lawyers include money laundering, real estate transactions, debt collections, business loans, and spousal support payments. The day is long past when a lawyer can turn a blind eye to red flags that alert the lawyer to suspected fraudulent conduct. Willful ignorance and conscious avoidance of disturbing facts are no longer a viable defense for a lawyer engaged in assisting a client with an illegal act.

The question then becomes what due diligence should a lawyer exercise to avoid an accusation of assisting in an illegal act. The New York City Bar Association Committee on Professional Ethics Opinion 2018-4, 7/18/18, offers a helpful analysis of this question. The New York Rules of Professional Conduct, like the Kentucky rules, are based on the ABA Model Rules. While there are minor differences between the two states’ rules, the principles are the same. We think the opinion is valid secondary authority for Kentucky lawyers.

The New York rules, like the Kentucky rules, prohibit a lawyer from knowingly assisting a client in crime or fraud. They do not explicitly cover the duties of a lawyer who has doubts about the legality of a client’s conduct; nor do they require a lawyer to investigate these doubts. The opinion, however, parlays several rules to reach the conclusion:

When asked to represent a client in a transaction that a lawyer believes to be suspicious, the lawyer has an implicit duty under some circumstances to inquire into the client’s conduct. If the lawyer believes that her client is entering into a transaction that is illegal or fraudulent, the lawyer ordinarily must attempt to inquire in order to provide competent representation to the client under Rule 1.1. Further, under Rule 1.2(d), which forbids knowingly assisting a client’s illegal or fraudulent conduct, a lawyer has the requisite knowledge if the lawyer is aware of serious questions about the legality of the transaction and renders assistance without considering readily available facts that would have confirmed the wrongfulness of the transaction. Implicit in the rule, therefore, is the obligation to take reasonably available measures to ascertain whether the client’s transaction is illegal or fraudulent. The lawyer’s inquiry must be consistent with the confidentiality duty of Rule 1.6, which governs disclosures the lawyer may make to third parties during the inquiry, as well as with the duty to keep the client informed during the representation. If the lawyer concludes that the client’s conduct is illegal or fraudulent, the lawyer must not further assist the wrongdoing and may undertake remedial measures to the extent permitted by the exceptions to the confidentiality rule.

What constitutes an adequate due diligence inquiry?

The opinion provides this guidance for making a reasonable inquiry into suspected crime or fraud:

Ordinarily, a lawyer will begin an inquiry by seeking information from the client before turning to other sources. After concluding a reasonable inquiry, the lawyer may ordinarily credit the client when there are doubts. Whether a particular inquiry is adequate will vary with the circumstances.

To the extent that the lawyer must seek information from others, the Rules may impose conditions or limits. In general, the duty under Rule 1.4 to keep the client reasonably informed will require the lawyer to explain why there are doubts about the legality of the transaction and what steps the lawyer proposes to take to allay or confirm suspicions. If suspicions are sufficiently serious to give rise to a duty of inquiry under Rule 1.2(d), then the lawyer would render further assistance at her peril.
A lawyer’s fear that a client may seek to cover up his actions does not eliminate the duty of communication. Rule 1.4(a)(5). If the lawyer does suspect a cover-up and cannot persuade the client to be forthcoming, she may choose to terminate the representation. Rule 1.16(c)(2). (Kentucky Rule 1.16(b)(2)).

The opinion makes it clear that a lawyer cannot ignore “red flags” and that willful ignorance cannot be used to avoid the duty of further inquiry if a lawyer suspects that the client’s actions are illegal. The website https://www.practicepro.ca/practice-aids/fraud-prevention/ provides this comprehensive red flag list from its Fraud Fact Sheet Law Pro:

These are the common red flags that can indicate that a matter is a fraud. While some of these things may occur on legitimate matters, you should proceed with extreme caution if many of them appear on any matter you are handling.

The opinion concludes with a review of remedial actions lawyers should consider upon discovering that illegal activity has occurred during the representation. If you are concerned that you may be assisting a client in illegal activity, we recommend you start your inquiry by reading Opinion 2018-4. Just Google the opinion title.

A Duty of Reasonable Inquiry Applies to Litigation Too

A recent New York case* considered sanctions in a litigation matter against a lawyer for failing to inquire whether his client’s representation that digital photos offered in evidence were taken two days after the incident. When the defendants viewed the metadata for the pictures, they discovered that they were taken two years after the incident. The lawyer escaped discipline for failing to verify the client’s representations based on the Court’s lawyer friendly finding that:

Finally, Leventhal explains that at the time he produced the photos he was unfamiliar with the process for checking a digital photograph’s metadata, which entails right-clicking it and navigating to its properties. Based on these facts, Leventhal’s production of the photos may have been careless, but was not objectively unreasonable. (citations omitted).