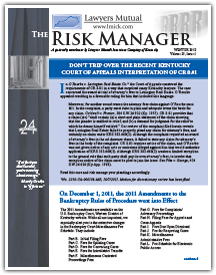 This opinion is an excellent review of Kentucky malpractice law covering when an attorney-client relationship comes into existence and when duties are owed to unrepresented intended beneficiaries of an action. The underlying case concerned a wrongful death action against the employer of a driver killed in a motor vehicle accident and loss of consortium for the deceased’s wife, Elizabeth. Plaintiff’s lawyer, Pete, did not name two minor children, Michael and Malik, as plaintiffs and the action did not include claims for loss of consortium/parental love and affection for the children. After the case was lost and the appeal dismissed, a professional negligence case was brought against Pete on behalf of Michael and Malik.

Pete filed a motion for summary judgment “alleging the suit was barred because there was no attorney-client relationship between Pete and the children and because any other claims of the Estate had since been barred by the statute of limitations. The motion was granted by the Jefferson Circuit Court on the grounds that Michael and Malik did not have privity with Pete, and thus did not enjoy an attorney-client relationship with Pete and lacked standing to sue for professional negligence.”

The Court of Appeals first considered whether there was a basis to conclude that Michael and Malik had an attorney-client relationship with Pete as Elizabeth claimed she believed:

The existence of an attorney-client relationship “is a contractual one, either expressed or implied by the conduct of the parties.” Daugherty v. Runner, 581 S.W.2d 12, 16 (Ky. App. 1978). Restated, the attorney-client relationship need not necessarily arise by contract, but may also arise through the conduct of the parties. Lovell v. Winchester, 941 S.W.2d 466, 468 (Ky. 1997). If the relationship is to arise through the parties’ conduct, it must be born of a “reasonable belief or expectation” on the part of the would-be client that the attorney has agreed to undertake the representation. Id.

Our Supreme Court has recently laid to rest any dispute over whether an attorney may have an attorney-client relationship with a minor in the case of Branham v. Stewart, 307 S.W.3d 94, 95 (Ky. 2010). In Branham, the high Court held that an attorney representing a minor’s next friend on behalf of a minor is in an attorney-client relationship with the minor as a real party in interest and owes professional duties to the minor. Id. at 95. The minor is also said to be in privity with the attorney, despite their minority. Id. at 99.

In the present circumstances, since Michael and Malik stood to be awarded one-half of any damages recovered in the wrongful death action, it seems quite reasonable that Elizabeth would have believed that Pete was representing the children and raising any and all available claims on their behalf. As such, we are compelled to reverse the trial court’s summary judgment.

Next the Court considered whether Pete owed Michael and Malik duties as third-party beneficiaries intended to be benefited by Pete’s performance:

When an attorney is retained to file a wrongful death action by the administrator of an estate, the attorney clearly intends to benefit both the client estate and the individuals in the estate who will receive a share of the damages under KRS 411.130 should he successfully defend the suit. They are two sides of one coin that cannot be logically divided from one another. Indeed, the individuals named in KRS 411.130(2) are the real parties in interest in such a suit. Vaughn’s Adm’r, 179 S.W.2d at 445.

Put this decision at the top of your risk management professional reading list.