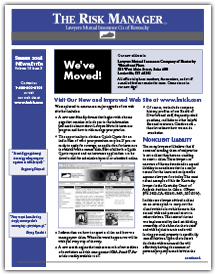 Clients have the option of firing their lawyer at will. Often before making that decision they will consult another lawyer – in effect becoming that lawyer’s prospective client. This raises the question of the professional responsibility of the consulted lawyer in terms of the client and the client’s current lawyer. The Philadelphia Bar Association considered this situation in its Ethics Opinion 2004-1 (Feb. 2004).

Points covered in the opinion are:

Often accepting a client under these circumstances is in the best interest of all concerned. Nonetheless, there are risk management considerations beyond any substantive law claims the discharged lawyer may have. Client screening is one of the most effective ways to prevent a malpractice claim and a client switching lawyers is often a signal that the client is difficult and more likely to make a malpractice claim if things don’t go well. Some things you should consider before accepting a dissatisfied client are whether you have difficulty reaching a fee agreement; have other lawyers rejected the matter; and most important of all, whether time limits that apply to the matter are too close to permit adequate investigation and preparation time.

One final thing to consider before accepting the matter is whether the scope of the engagement will include any malpractice by the discharged lawyer discovered during the representation. If malpractice is discovered, the client must be notified. If, however, you do not want to become involved in a malpractice claim, be sure to limit scope to preclude that aspect of the matter.