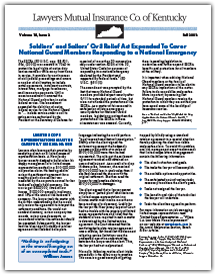 The SSCRA (50 U.S.C. app. §§ 501-594, (2000)) was enacted in 1940 to protect the legal rights of active duty service members while away from home in service. It provides for continuances of civil judicial proceedings and covers a number of civil matters to include rental agreements, installment contracts, interest rates, mortgage foreclosures, and income tax payments. Until a recent amendment it covered the National Guard only when in active federal service. The amendment expanded the definition of active federal service for the National Guard to “… include service under a call to active service authorized by the President or the Secretary of Defense for a period of more than 30 consecutive days under section 502(f) of title 32, United States Code for purposes of responding to a national emergency declared by the President and supported by Federal funds.” (50 U.S.C. §511(1)).

The amendment was prompted by the fact that many National Guard members provided airport security after 9/11 for extended periods of time, but were not afforded the protections of the SSCRA. As a matter of fairness and in anticipation of future emergency security duties for National Guard members, legislation granting them the protections of the SSCRA in these circumstances was enacted. Currently, there is pending legislation to modernize and further expand SSCRA benefits and protections for all members of the military.