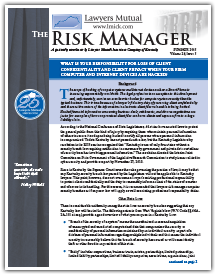 In 2008 lawyer Holmes assisted Svaldi, a wealthy 93-year- old client, by preparing a standard power of attorney granting J and E who managed the apartment where he lived the authority to manage, sell, and transfer his assets and to open and close bank accounts and sign checks on his behalf. In an effort to protect Svaldi, Holmes modified the POA by adding these two provisions:

J and E did none of these things even after Holmes in 2008 sent a letter to J reminding her of her obligation to comply with these requirements. Holmes made no other follow-up effort to obtain compliance. In 2011 large withdrawals from Svaldi’s bank account prompted the bank to notify the police. Investigation revealed that over $800,000 was stolen by J and E.

Svaldi then sued Holmes for malpractice claiming that by including the inventory and annual accounting requirements in the POA, Holmes assumed a duty to monitor compliance. Holmes defended by arguing that his only duty to Svaldi regarding the POA was to prepare it competently and with due care. Holmes was granted summary judgment by the trial court, but the Ohio Court of Appeals reversed this decision.

In its decision the Court wrote:

The expert witnesses of both parties testified that provisions such as paragraphs 10 and 11 do not typically appear in powers of attorney. Holmes explained that he incorporated the inventory and accounting scheme into Svaldi’s power of attorney because the designated agents were not Svaldi’s relatives and, thus, lacked a familial duty to act in Svaldi’s best interests. To protect Svaldi, Holmes sought to create transparency about the amount of Svaldi’s assets at the origination of the power of attorney and the subsequent expenditure of those assets by Svaldi’s agents.