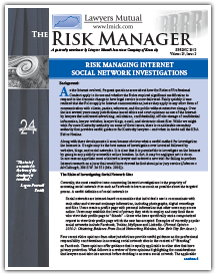 As the Internet evolved, frequent questions arose about how the Rules of Professional Conduct apply to its use and whether the Rules required significant modification to respond to the dramatic change in how legal service is now delivered. Fairly quickly it was realized that the Rules apply to Internet communications just as they apply to any other form of communication with clients, parties, witnesses, and the public without extensive change. Over the last several years many jurisdictions issued ethics and court opinions on use of the Internet by lawyers that addressed advertising, solicitation, confidentiality, off-site storage of confidential information, lawyer websites, lawyer blogs, e-mail, and electronic client files. While we might wish for more Kentucky authority on some of these issues, there is considerable secondary authority that provides useful guidance for Kentucky lawyers – and when in doubt call the KBA Ethics Hotline.

Along with these developments it soon became obvious what a useful method for investigation the Internet is. Google may be the best means of investigation ever invented followed by websites, blogs, and social networks. It is clear that it is permissible to investigate on the Internet by going to any publicly accessible online location. In fact, it may be negligent not to do so. In one case an appellate court criticized a lawyer and ordered a new trial for failing to perform Internet research on a juror that would have showed he lied about prior jury service (Johnson v. McCullough, 306 S.W. 3d 551 (Mo. 2010)).

Currently, the most sensitive issue concerning Internet investigations is the propriety of accessing social network sites such as Facebook to learn as much as possible about the targeted person. A useful definition of social network is:

Social networks are internet-based communities that individuals use to communicate with each other and view and exchange information, including photographs, digital recordings and files. Users create a profile page with personal information that other users may access online. Users may establish the level of privacy they wish to employ and may limit those who view their profile page to “friends” – those who have specifically sent a computerized request to view their profile page which the user has accepted. Examples of currently popular social networks include Facebook, Twitter, MySpace and LinkedIn. (Formal Opinion 2010-2: Obtaining Evidence From Social Networking Websites, New York City Bar Assoc.)

Four recent ethics opinions from other jurisdictions provide useful guidance on the professional responsibility considerations in accessing social network sites in the context of “friending” on Facebook. These opinions offer guidance that is equally applicable to other sites that have privacy protection. What follows is a review of these opinions highlighting the considerations that lawyers must take into account before deciding to access a social network. The applicable Kentucky Rules of Professional Conduct are consistent with the rules applied in the opinions and are:

The Philadelphia Bar Association Professional Guidance Committee in Opinion 2009-02 (3/2009) considered the question whether a lawyer could use a third person to friend a deposed and unrepresented witness favorable to the adverse party on Facebook. The third person would offer only truthful information (e.g., her real name), but would not reveal that the real purpose of the request was to acquire impeaching information for use in the litigation.

One of the most sensitive uses of Internet investigations concerns jurors. Kentucky Rule 3.5, Impartiality and Decorum of the Tribunal, provides this guidance on juror contact:

A lawyer shall not:

One ethics opinion addresses this issue under the heading of: Lawyer investigation of juror Internet and social networking postings during conduct of trial (New York City Lawyers Association Committee On Professional Ethics Formal Opinion No.: 743,5/18/2011). Those parts of the opinion that are of potential use to Kentucky lawyers are:

While other jurisdiction ethics opinions do not substitute for Kentucky authority, the ones covered in this article contain thoughtful consideration of Internet Social Network investigations and reach reasonable conclusions. At a minimum they are a good place to start in researching the professional responsibility requirements for a Kentucky lawyer conducting an Internet Social Network investigation. When in doubt take advantage of the KBA Ethics Hotline. Always keep in mind that an Internet investigation found to be fraudulent might violate criminal law as well as expose a lawyer to civil tort actions for fraud and deceit.

For an overall consideration of the ethics of lawyer investigations you may find the two-part KBA Bench & Bar article “The Ethics of Civil Practice Investigations” appearing in the September and November 2007 issues helpful. The article considers these three questions”

It is available on Lawyers Mutual’s website at www.lmick.com. Click on Resources, Bench and Bar Articles, and select the two-part article.