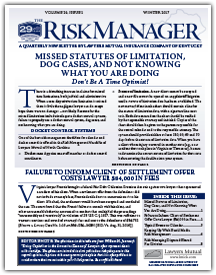 It is not unusual for lawyers not in the same firm when dividing a shared fee to disagree on the division of the proceeds.  When one lawyer receives earned fees in which the other lawyer has an interest that is disputed, how should the lawyer holding the fees safeguard them until the dispute is resolved?

The ABA in Formal Opinion 475, Safeguarding Fees That Are Subject to Division With Other Counsel [12/7/2016] provides an answer to this question by equating the other lawyer to a third person for purposes of Model Rule 1.15[a] and [d], Safeguarding Property.  The opinion makes it clear that this is the only context in which the other lawyer has the status of third party for purposes of the Rules of Professional Conduct.

From this designation as a third party it follows that the disputed funds should be treated in the same manner as disputed funds with a client.  The opinion includes this guidance:

Editors Note: The Kentucky Rule of Professional Conduct 1.15 is compatible with Model Rule 1.15 in all pertinent parts for the purposes of the ABA’s guidance on this issue.