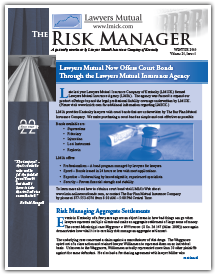 Events in Kentucky of a few years ago are an object lesson in how bad things can go when lawyers represent multiple clients and make an aggregate settlement of large sums of money. The recent Mississippi case Waggoner v. Williamson (8 So. 3d 147 (Miss. 2009)) once again demonstrates how vital it is to carefully risk manage an aggregate settlement.

The underlying case concerned a claim against a manufacturer of diet drugs. The Waggoners opted out of a class action and retained lawyer Williamson to represent them on an individual basis. Unknown to the Waggoners, Williamson actually represented more than 30 other plaintiffs against the same defendant. He also had a fee sharing agreement with lawyer Miller who represented 14 clients all part of the same suit with the Waggoners. After signing a settlement agreement, the Waggoners learned of the true situation and sued Williamson and Miller for breach of fiduciary duty, breach of contract, and negligent representation. They alleged that they did not know that they were not individually represented and that they were never told of the existence and the amount of the aggregate settlement of $73,500,000 (Williamson admitted that the Waggoners were purposefully not told of the aggregate settlement). The Waggoners also claimed that they were never informed of the other claims included in the aggregate settlement, the financial allocation to each claimant, or the basis for calculating distributions. Finally, they alleged that they were given only 20 minutes to agree to sign the settlement and were informed if they did not sign they could forfeit any entitlement to the settlement. The trial court granted summary judgment for the lawyers on all the important aspects of the case. The Mississippi Supreme Court reversed the trial court’s summary judgment and returned the case for a jury trial on the merits.

With the Mississippi case in mind, begin risk managing aggregate settlements by using this definition from ABA Formal Opinion 06-438 (2/10/2006):

An aggregate settlement or aggregated agreement occurs when two or more clients who are represented by the same lawyer together resolve their claims or defenses or pleas.

A lawyer who represents two or more clients shall not participate in making an aggregate settlement of the claims of or against the clients, or in a criminal case an aggregated agreement as to guilty or nolo contendere pleas, unless each client gives informed consent, in a writing signed by the client. The lawyer's disclosure shall include the existence and nature of all the claims or pleas involved and of the participation of each person in the settlement. (emphasis added)

Differences in willingness to make or accept an offer of settlement are among the risks of common representation of multiple clients by a single lawyer. Under Rule 1.7, this is one of the risks that should be discussed before undertaking the representation, as part of the process of obtaining the clients' informed consent. In addition, Rule 1.2(a) protects each client's right to have the final say in deciding whether to accept or reject an offer of settlement and in deciding whether to enter a guilty or nolo contendere plea in a criminal case. The Rule stated in this paragraph is a corollary of both these Rules and provides that, before any settlement offer or plea bargain is made or accepted on behalf of multiple clients, the lawyer must inform each of them about all the material terms of the settlement, including what the other clients will receive or pay if the settlement or plea offer is accepted. See also Rule 1.0(e) (definition of informed consent). Lawyers representing a class of plaintiffs or defendants, or those proceeding derivatively, may not have a full client-lawyer relationship with each member of the class; nevertheless, such lawyers must comply with applicable rules regulating
notification of class members and other procedural requirements designed to ensure adequate protection of the entire class.

At the beginning of the representation use a letter of engagement that explains what an aggregate settlement is and the terms, conditions, and procedures that will be followed in allocating awards or contributions agreed in the aggregate settlement.

When an aggregate settlement is offered, clients should be informed in a writing to be signed by the clients that includes at a minimum the following details as recommended in ABA Formal Opinion 06-438 (2/10/2006):