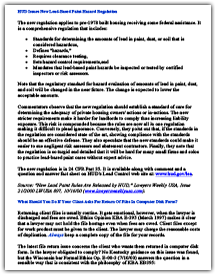 The best way to learn about risk management is from other lawyes'r mistakes in other jurisdictions. Here are a few examples of what’s going on “out there.”

Too Accommodating: A California law firm learned the hard way that a single brief appearance as an accommodation to another lawyer creates an attorney-client relationship with malpractice exposure. A firm lawyer as a professional courtesy appeared for the lawyer at a summary judgment motion hearing. When the lawyer’s client later sued for malpractice the “accommodating firm” was sued along with other defendants. The firm argued that it had not advised the client or become associated with the other lawyer. Rather they made a special appearance as the other lawyer’s agent on this single motion and owed no duties to his client. The court held, “By appearing at a hearing in a case in which the attorney has no personal interest, the attorney is obviously representing the interest of someone else, someone who is a party to that action. The client is such a person; the client’s attorney of record is not. We conclude that an attorney making a special appearance is representing the client’s interests and has a professional attorney-client relationship with the client.” Streit v. Covington & Crowe, Cal. Ct. App. 4th Dist., No. E023862, 7/20/00; Current Reports, p.399, Vol. 16, No. 14, 8/2/00, ABA/BNA Lawyers’ Manual On Professional Conduct.

The Same Ole’ Story: A Washington state lawyer was suspended for two years for client trust account abuse. He got into a financial bind when his personal and business accounts were garnished to pay overdue child support payments. This led to an inability to meet law office expenses. His solution was to keep earned fees in the trust account. He then paid office and personal expenses out of the trust account. The trust account balance on occasion was less than the amount of client funds required to be in the account, but ultimately no client lost money. The lawyer was lucky in two ways. The bar delayed three years in prosecuting the case during which the lawyer took aggressive remedial action. Second, the court made a distinction between intentional theft of client funds and knowing misuse of client property. Finding this case to be the latter, suspension was an adequate punishment. In Re Tasker, Wash. No. 12426-4, 9/14/00; Current Reports, p.517, Vol. 16, No. 18, 9/27/00, ABA/BNA Lawyers’ Manual On Professional Conduct.