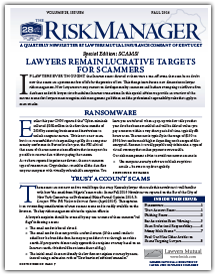 Earlier this year CNN reported that “Cyber-criminals collected $209 million in the first three months of 2016 by extorting businesses and institutions to unlock computer servers.  This is not a new scam, but is so successful that it is expanding rapidly. At a computer security conference in Boston late last year, the FBI advised that some of the ransomware is so effective that in may not be possible to recover data without paying the ransom.

As we have reported in prior newsletters, the most common type of ransomware, Cryptolocker, scrambles all the data files on your computer with virtually unbreakable encryption. You learn you are infected when a pop-up window tells you that your data has been scrambled and will be deleted unless you pay a ransom within a very short period of time, typically 48 hours or so. The ransom is typically in the range of $100 to $300, but can be much higher depending on the scope of files encrypted. Ransom is usually payable only in bitcoins, a type of virtual currency that makes payments untraceable.

Our risk management advice to avoid ransomware scams is: