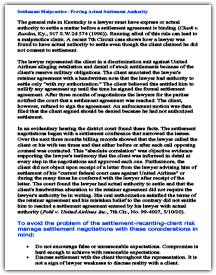 The general rule in Kentucky is a lawyer must have express or actual authority to settle a matter before a settlement agreement is binding (Clark v. Burden, 917 S.W.2d 574 (Ky. 1996)). Running afoul of this rule can lead to a malpractice claim. A recent 7th Circuit case shows how a lawyer was found to have actual authority to settle even though the client claimed he did not consent to settlement.

The lawyer represented the client in a discrimination suit against United Airlines alleging retaliation and denial of stock entitlements because of the client’s reserve military obligations. The client annotated the lawyer’s retainer agreement with a handwritten note that the lawyer had authority to settle only “with my authorization.” The client believed this entitled him to nullify any agreement up until the time he signed the formal settlement agreement. After three months of negotiations the lawyers for the parties notified the court that a settlement agreement was reached. The client, however, refused to sign the agreement. An enforcement motion was then filed that the client argued should be denied because he had not authorized settlement.

In an evidentiary hearing the district court found these facts. The settlement negotiations began with a settlement conference that narrowed the issues. Over the next three months billing records showed that the lawyer called the client or his wife ten times and that either before or after each call opposing counsel was contacted. This “absolute correlation” was objective evidence supporting the lawyer’s testimony that the client was informed in detail at every step in the negotiations and approved each one. Furthermore, the client did not object upon receipt of a letter from the lawyer advising him of settlement of his “current federal court case against United Airlines” or during the many times he conferred with the lawyer after receipt of the letter. The court found the lawyer had actual authority to settle and that the client’s handwritten alteration to the retainer agreement did not require the lawyer’s authority be in writing. His oral authorization satisfied the terms of the retainer agreement and his mistaken belief to the contrary did not entitle him to rescind a settlement agreement entered by his lawyer with actual authority (Pohl v. United Airlines Inc., 7th Cir., No. 99-4007, 5/10/00).

To avoid the problem of the settlement recanting client risk manage settlement negotiations with these considerations in mind: