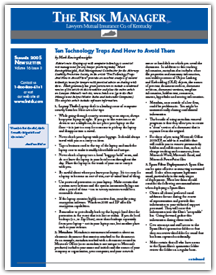 Editor’s Note: This article is one of a series that LawReader.com has agreed to provide for Lawyers Mutual’s newsletter as a bar service. LawReader.com provides Internet legal research service specializing in Kentucky law. For more about LawReader go towww.LawReader.com.

Representing criminal clients is a dicey business. You can always expect that those sentenced to custody will consider filing an RCr 11.42 motion to vacate, set aside, or correct the sentence. Questioning your competence may be their only hope to avoid a prison sentence. In capital cases, you can expect the Department of Public Advocacy to assist in criticizing your work. The rule seems to be if all else fails, blame the lawyer.

The first thing to consider is that in Kentucky, “The two-pronged test for ineffective assistance of counsel is: 1) whether counsel made errors so serious that he was not functioning as ‘counsel’ guaranteed by the Sixth Amendment, and (2) whether the deficient performance prejudiced the defense.” Martin v. Commonwealth, (U) NO. 2002-CA-002529-MR.

Next, note that in June of this year the U.S. Supreme Court in Rompilla v. Beard (545 U.S.___, 2005 WL 14211390 (2005)) expanded standards for legal competence required of defense counsel. Defense counsel concluded from the client’s and his family’s statements that an investigation of his early childhood would have been counterproductive. The Court ruled he should have investigated regardless of the client’s statements.

"Strickland v. Washington, 466 U.S. 668, 687, 104 S.Ct. 2052, 2064, 80 L.Ed.2d 674 (1984).... requires that Appellant show that his lawyer's performance was deficient, which requires showing that the lawyer made errors so serious that he was not functioning as the "counsel" guaranteed by the Sixth Amendment. Appellant must also show that the deficient performance prejudiced his defense, i.e., that there is a reasonable probability that but for counsel's error the result of the proceeding would have been different.

… a defendant is not guaranteed errorless counsel or counsel that can be judged ineffective by hindsight, but rather counsel rendering reasonably effective assistance.

… we must consider the totality of evidence before the jury and assess the overall performance of counsel throughout the case in order to determine whether the identified acts or omissions overcome the presumption that counsel rendered reasonable professional assistance.

Conclusionary allegations which are not supported with specific facts do not justify an evidentiary hearing because RCr 11.42 does not require a hearing to serve the function of discovery. Stanford v. Commonwealth, Ky., 854 S.W.2d 742 (1993).

In attempting to obtain post-conviction relief, the movant must present facts with sufficient particularity to generate a basis for relief. Foley v. Commonwealth, 17 S.W.3d 878, 890 (Ky. 2000).

Claims for RCr 11.42 relief raised just during 2005 include failure to:

Any of these claims, if proven, could result in a malpractice claim. The lesson of all this is that you should fully advise your client, investigate the case thoroughly, object to everything, keep good notes, and keep your fingers crossed.