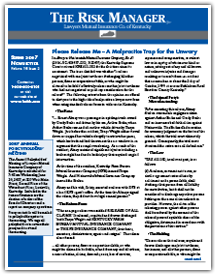 In Abney v. Nationwide Mutual Insurance company, Et Al (2003-CA-2013-000937-DG, 3/22/07) the Kentucky Supreme Court reviewed KRS 411.182 for the first time since its enactment. The issue decided was whether “a release negotiated with one joint tortfeasor discharging ‘all other persons, firms or corporations liable, or who might be claimed to be liable’ effectively release another joint tortfeasor who had not negotiated or paid any consideration for the release?” The following extracts from the opinion are offered to alert you to the high risk of malpractice a lawyer now faces when using standard release forms in wide use in Kentucky.

“… Ernest Abney was a passenger in a pickup truck owned by Grady Brake and driven by his son, Arthur Brake, when Arthur Brake rear-ended another vehicle driven by Tonya Wright. Just before the accident, Tonya Wright either slowed down or stopped her vehicle abruptly to retrieve her purse, which her husband had thrown out the car window in an argument that the couple was having. As a result of the accident, Abney sustained significant injuries including a broken right hand and a back injury that required surgical intervention.

Abney and his wife, Kristy, executed a release with KFB at a local KFB agent's office. At the time the Abneys signed the release, they did not have legal counsel present.”

“The one-page release was entitled ‘RELEASE OF ALL CLAIMS.’ It released, acquitted and forever discharged ‘both Tonya Wright and KENTUCKY FARM BUREAU MUTUAL INSURANCE COMPANY or THE FB INSURANCE COMPANY, their heirs, executors, administrators, agents and assigns.’ The release also released:

... all other persons, firms or corporations liable, or who might be claimed to be liable, of and from any and all actions, causes of action, claims, demands, costs, loss of services, expenses and compensation, or suits at law or in equity, of whatsoever kind or nature, arising out of any and all known and unknown injuries and damages resulting or to result from an accident that occurred on or about the 2 day of October, 1999 at or near Bethlehem Road Bourbon County Kentucky.”

“After executing this release, Abney filed an automobile negligence claim against Arthur Brake and Grady Brake and an insurance bad faith claim against Nationwide. The Brakes filed a motion for summary judgment on the basis of the release, which the trial court ultimately granted. Consequently, the trial court dismissed the action as to all defendants.”

“KRS 411.182, in relevant part, is as follows:
(4) A release, covenant not to sue, or similar agreement entered into by a claimant and a person liable, shall discharge that person from all liability for contribution, but it shall not be considered to discharge any other persons liable upon the same claim unless it so provides. However, the claim of the releasing person against other persons shall be reduced by the amount of the released persons' equitable share of the obligation, determined in accordance with the provisions of this section.”

“Does a release that releases, acquits and forever discharges one joint tortfeasor, her insurer, and all other persons, firms or corporations liable, or who might be claimed to be liable, satisfy the "unless it so provides" requirement of KRS 411.182(4)? By the plain terms of the statute and the plain terms of the release, we hold that it does.

It is of no consequence to our decision that neither the Brakes nor Nationwide are specifically named or specifically identified in the release. If our legislature had intended to impose a specific identity requirement, as Abney urges this Court to impose, it would have so provided.

It is further of no consequence to our decision that the release was a standard, fill-in the blank form that was broad in scope. It is a contract nonetheless. See Richardson, 660 S.W.2d at 8. As with contracts generally, the courts must look to the language of the release to determine the parties' intentions. See Woodruff v. Bourbon Stock Yards Co., 149 Ky. 576, 149 S.W. 960, 962 (1912). When no ambiguity exists in the contract, we look only as far as the four corners of the document to determine that intent.

The description of the discharged parties read in context of this release shows that the parties' intention was to put an end to all of Abney's claims relating to the accident that occurred on October 2, 1999, at Bethlehem Road, Bourbon County, Kentucky. This included any possible third party claims against the KFB insured. Summary judgment in favor of the Brakes and Nationwide on the basis of this release as evaluated under KRS 411.182(4) was appropriate.”