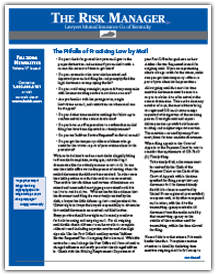 One way to invite a malpractice claim or be accused of an ethics violation is to have a fee dispute with a client. An angry client sued for a fee is very likely to fight back with allegations of malpractice and misconduct. The Kentucky Supreme Court in Wo Sin Chiu v. Shapero made a significant change in the method for calculating an attorney’s lien for legal fees involving a contingency fee contract that should be carefully considered when deciding to sue a client for contingency fees.

In a fee dispute arising out of a personal injury case, the attorneys were found to have been discharged “without cause” by Chiu who subsequently recovered $175,000. The discharged attorneys had a contingent fee contract for their services and filed a civil action claiming entitlement to the contingency fee as set forth in the employment agreement. In the course of litigation Chiu raised the issue of whether there was an unethical solicitation of his case because he had signed the employment contract while in his hospital bed soon after being injured.

The Court found no unethical solicitation and overruled prior Kentucky case law that held damages for wrongful breach of a contingent fee employment agreement is determined by the terms of the agreement. See LaBach v. Hampton, 585 S.W.2d 434 (Ky. App. 1979). The Court in Chiu created a new doctrine to be applied in Kentucky:

“...when an attorney employed under a contingency fee contract is discharged without cause before completion of the contract, he or she is entitled to fee recovery on a quantum meruit basis only, and not on the terms of the contract.”

Under the quantum meruit theory adopted by the Court, litigation concerning attorney’s fees will be a fact question to be determined according to the standard set out in Inn-Group Management Servs., Inc. v. Greer, 71 S.W.3d 125 (2002). There the Court ruled that "[w]hat constitutes a reasonable attorney fee is an issue of fact when the action is between an attorney and client to collect or defend a fee for representation." Id. at 130.

This new ruling makes it even more imperative that attorneys carefully document in detail all of their work in a contingency fee case even though not paid on an hourly basis. Thorough documentation is key to the defense of a malpractice claim arising out of a contingency fee dispute and is the surest way of proving the value of legal services. Far too often attorneys find themselves in the awkward position of having spent considerable time in preparing a contingency fee case prior to discharge, but with a file containing only a few documents and no hourly record of work performed.

In "Avoiding Malpractice" Stephen M. Blumberg provides this useful risk management analysis of determining whether to sue a client for fees:

Avoid Suing Clients for Fees
Experience has shown that a great many legal malpractice cross-complaints are filed in response to the attorney's suit for unpaid fees. Often, the fees were not properly established, billed or collected prior to the litigation.