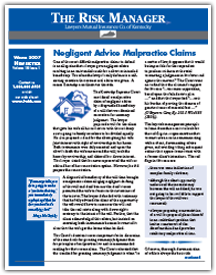 One of the most difficult malpractice claims to defend is an allegation that a lawyer gave negligent advice resulting in an unintended result for a client or intended beneficiary. Too often the lawyer’s only defense is a self-serving assertion that correct oral advice was given. A recent Kentucky case illustrates the risk.

The Kentucky Supreme Court considered a malpractice claim of negligent advice by a disgruntled beneficiary of a will that was dismissed on motion for summary judgment. The lawyer prepared a will for the client that gave his wife all his real estate with the residuary estate going to family members to be divided equally. He also prepared a deed for the client giving his wife joint interest with right of survivorship in his home. Both instruments were duly executed and upon the client’s death the wife renounced the will, took the home by survivorship, and claimed her dower interest. The lawyer stated that he never represented the wife or advised her of her renunciation option. However, he did prepare the renunciation.

A disgruntled beneficiary of the will then brought a malpractice claim alleging negligent drafting of the will and deed because the deed’s terms permitted the wife to frustrate the intentions of the testator. The lawyer defended with testimony that he fully advised the client of the opportunity the wife would have to renounce the will and take the real estate along with dower rights contrary to the intent of the will. Further, that the client acknowledged this advice, but insisted on executing both instruments because he wanted it clear that the wife got the home when he died.

The Court’s decision is more important for its discussion of the standards for granting summary judgment than for principles of malpractice law and is recommended reading for that reason alone. The Court reiterated that the standard for granting summary judgment is when “as a matter of law, it appears that it would be impossible for the respondent to produce evidence at the trial warranting a judgment in his favor and against the movant.” The Court went on to find that the claimant’s support for his case “was mere supposition, based upon the failed estate plan …..” and that the lawyer had “… met his burden of proving the absence of genuine issues of material fact ….” (O’Bryan v. Cave, Ky. 202 S.W.3d 585 (2006)).

The key risk management principle to learn from this case is to look for the red flags in a representation that warrant extra care in communicating with a client, documenting advice given, and avoiding taking subsequent actions that appear inconsistent with a former client’s intentions. The red flags in this case are:

Of course, thorough documentation of a file is always the best risk management in any matter. The concern of many lawyers about documenting a case, however, is that while they want to leave a paper trail of client communications they also want to avoid flooding the client with defensive letters about representation. One lawyer calls letters explaining negative developments as CYA letters -- not meaning what you are thinking -- rather “Change Your Attitude” letters. Keep expectations realistic. Always document tough issue discussions in a letter sent to the client. Nowhere is this more important than after a settlement talk with a client or when there is an apparent inconsistency in estate planning instruments (think taxes and problematic bequests).

Keep in mind that when advising a client on complex or tough issues the client does not always appreciate what is important and what is not. To the client it is all important. The client is dealing with a stream of seamless information. Conversely, the lawyer appreciates the significant points and retains what is important. Typically, the client is stressed when he sees a lawyer – his mind is fogged. A client left in that posture often leads to problems. Be sure that within a few days after one of these meetings, the client receives a letter from you stressing the important considerations discussed at the meeting, advice given, and actions to be taken. The client’s mind is clear and it takes! Even if the client cannot be there when you need him, the file speaks for itself and the lack of merit of a malpractice claim for inadequate advice is easily shown. Best of all, it should avoid the claim in the first place.