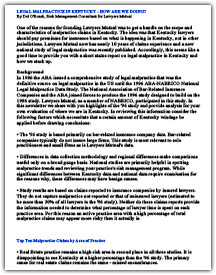 One of the reasons for founding Lawyers Mutual was to get a handle on the scope and characteristics of malpractice claims in Kentucky. The idea was that Kentucky lawyers should pay premiums for insurance based on what is happening in Kentucky, not in other jurisdictions. Lawyers Mutual now has nearly 10 years of claims experience and a new national study of legal malpractice was recently published. Accordingly, this seems like a good time to provide you with a short status report on legal malpractice in Kentucky and how we stack up.

Background
In 1986 the ABA issued a comprehensive study of legal malpractice that was the definitive source on legal malpractice in the US until the 1996 ABA-NABRICO National Legal Malpractice Data Study. The National Association of Bar-Related Insurance Companies and the ABA joined forces to produce the 1996 study designed to build on the 1986 study. Lawyers Mutual, as a member of NABRICO, participated in this study. In this newsletter we share with you highlights of the ‘96 study and provide analysis for your own evaluation of where we are in Kentucky. In reviewing this information consider the following factors which necessitate that a certain amount of Kentucky windage be applied before drawing conclusions: