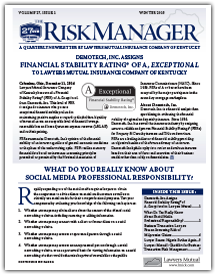 An Iowa lawyer’s client showed him documents indicating that the client was the beneficiary of a bequest of $18,800,000 from his long-lost cousin in Nigeria. All that was necessary to receive the bequest was payment of $177,600 in taxes owed on the inheritance in Nigeria. The lawyer’s fee for representing the client in collecting the inheritance was 10% or over $1.8 million dollars.

To raise the money to pay the taxes the lawyer solicited over $200,000 from current and former clients, neglecting to tell them of his enormous fee. The lawyer then contacted several persons including those he believed were representatives of the “Central Bank of Nigeria,” the “African Union,” the President of Nigeria, and a Nigerian lawyer who claimed to have witnessed the will. After the money was transferred to the scammers, the money, and the bequest soon disappeared.

The ensuing bar complaint resulted in the lawyer receiving a minimum one-year suspension from practice. The Iowa Supreme Court found that the lawyer failed to make a competent analysis of the legitimacy of the client’s inheritance, engaged in conflicts of interest, and violated rules that regulate lawyers’ business transactions with current clients. (Iowa Supreme Court Attorney Disciplinary Board, Complainant, v. Robert Allan Wright Jr., Respondent; No. 13–0780; December 6, 2013)

The lessons learned from this case are self-explanatory. We hope all Kentucky lawyers are on the alert for this and all other kinds of scams.