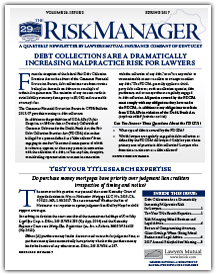 One of a lawyer’s biggest nightmares is to do considerable work on a contingency fee case only to be discharged by the client prior to trying or settling the matter. The lawyer then learns the former client promptly settled the case for a substantial sum seemingly finessing the lawyer out of the contingency fee. This is what happened in Hughes & Coleman, PLLC v. Chambers, 526 S.W. 3d 70 (Ky. 2017).

Hughes was retained by Underwood to represent him for injuries sustained in a car crash. This agreement provided for Hughes to be paid on a contingency fee basis and, among other terms, provided that the firm would “assist the client in submitting medical bills for payment to any responsible insurance carrier or agency.”

Hughes then requested and received from Underwood’s PIP insurer Underwood’s remaining PIP benefits of $18,812.94. These funds were deposited in Hughes’ client trust account. Hughes repeatedly requested Underwood to provide wage verification documents and physician statements to verify entitlement to further lost wage payments. None were ever sent to Hughes.

Hughes made two disbursements from these funds – one to Underwood and the other in full satisfaction of a hospital bill. The remaining funds in the client trust account were $14,344.06.

Hughes then filed suit and began settlement negotiations with the tortfeasor’s insurer.

The insurer offered $145,000, but Hughes valued the case at $200,000 and recommended against settling for the insurer’s offer. Shortly thereafter Hughes and Underwood fell out because Hughes refused to send Underwood the remaining $14,344.06. Underwood then discharged the firm alleging that he had been mislead about the need to keep the funds in Hughes’ client trust account and asked that his file and the remaining funds be sent to him. Hughes promptly complied.

Underwood hired Chambers who quickly negotiated a settlement of $200,000 with the tortfeasor’s insurer. Chambers received a contingency fee of $66,660. Hughes then asserted an attorney’s lien claiming a quantum meruit share of the fee in payment for the work it did for Underwood prior to being discharged.

Chambers denied Hughes was entitled to any part of the fee arguing the discharge was “for cause” and so barred its quantum meruit claim. The justifiable cause was alleged to be Hughes’ mishandling of Underwood’s no-fault (PIP) benefits that was both unethical and illegal.

The trial court heard expert testimony that it was common practice to handle a client’s no fault benefits as Hughes had. The expert “opined that the firm had provided diligent service, that Underwood’s case appeared to have been progressing well, and that there was nothing about the representation that he considered good cause for discharging the firm.” The court also considered the 503-page case file that Hughes had compiled from its case-management system. The court found the file to be “extremely detailed and meticulous.”

The trial court concluded that Hughes was discharged without cause and on a quantum meriut basis apportioned 75% ($49,995) of the fee to Hughes and 25% ($16,665) to Chambers. Chambers appealed only on the issue whether Hughes’ discharge was for cause. The Court of Appeals reversed ruling that “in its handling of Underwood’s no-fault benefits, Hughes had maintained a position unsupported by law and adverse to its client, which constituted valid cause for Underwood’s terminating its services.” The Supreme Court granted Hughes petition for discretionary review.

The Supreme Court’s opinion is a clinic on when a lawyer is entitled to a quantum meruit fee. It teaches that there are different standards for determining whether quantum meruit is warranted depending on whether the client discharged the lawyer; or the lawyer withdrew from the representation.

What follows is a break down of the Court’s guidance for each situation.

In Baker v. Shapero, 203 S.W.3d 697 (Ky. 2006), the Court established the rule that “when an attorney employed under a contingency fee contract is discharged without cause before completion of the contract, he or she is entitled to fee recovery on a quantum meruit basis only, and not on the terms of the contract.”

What is for cause?

LAWYER WITHDRAWS FROM THE REPRESENTATION

Whether a withdrawing lawyer may recover a quantum meruit fee on the former client’s ultimate recovery turns on whether the lawyer’s reason for withdrawing constituted “good (or just) cause.”

What is good (or just) cause?

The Supreme Court found that the trial court’s ruling was correct that Underwood’s dissatisfaction with the handling of PIP benefits was not a sufficient cause to bar Hughes from being paid for the work they performed. The judgment awarding Hughes a quantum meruit fee was reinstated.

Document the File!: Too often lawyers fail to thoroughly document a contingency fee case as they would an hourly fee matter. When a fee dispute arises the court is presented with a sparse file apparently showing the lawyer had done little work on the case. Thorough documentation of a contingency fee dispute is the surest way of proving the value of legal services when a dispute arises. A significant factor in Hughes prevailing on its quantum meruit claim was its 503-page case file compiled from its case-management system. Both the trial court and the Supreme Court considered this file substantial evidence. The trial court described the file as “extremely detailed and meticulous.”

Cover Fee Payments in Detail in the Contingency Fee Agreement: While not stipulated in Kentucky Rule of Professional Conduct SCR 3.130 [1.5, Fees], recommended additional matters to cover in contingency fee agreements to avoid disputes are:

Be Sure to Use the Correct Standard in Determining Whether You are Withdrawing for Good or Just Cause and Will be Entitled to a Quantum Meruit Fee: The distinction between withdrawing in compliance with the Kentucky Rules of Professional Conduct and with a judge’s permission to withdraw and withdrawing for good and just cause warranting a quantum meruit fee is explained in Hughes and Lofton.

Hughes: Whether a quantum meruit fee is forfeited is not governed by the ethics rules and standards – guided perhaps, but not governed. Cf Lofton, 367 S.W.3d at 596 (differentiating “good cause” for withdrawing as counsel with court’s leave under SCR 3.130-1.16(b), from the higher standard for withdrawing and receiving quantum meruit compensation). Even if Hughes & Coleman neglected to fully explain to Underwood, in clear and understandable terms, his PIP benefits and their handling by them, that does not amount to the sort of culpable conduct that forfeits a discharged lawyer’s right to be paid for services rendered.

Lofton: However, we find that the “good faith” or “good cause” or a comparable basis for withdrawing as counsel under SCR1.16(b) does not translate into a comparable justification or “good cause” to be entitled to quantum meruit compensation for past services. They are two entirely different standards, with a much lower threshold to withdraw from the case than to withdraw with quantum meruit compensation.