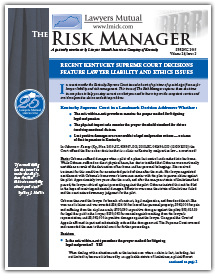 In Kentucky Bar Association v. Jacobs (Ky., No.2012-SC-000413-KB (12/4/2012)) the Supreme Court considered a disciplinary action against a lawyer who served as both executor and attorney for the estate. The lawyer was cited for charging an unreasonable fee, co-mingling funds of his client and third parties with his personal accounts, and for failing to provide a full accounting of the fees charged – violations of the Kentucky Rules of Professional Conduct SCR 3.130 (1.5(a) and 1.15(a) and (b). In finding the Respondent guilty of the charges, the Court provided the following guidance for lawyers serving as executor and attorney for an estate:

Respondent argued that he considered his advance flat fee earned and, therefore, was properly placed in his personal account. The Court building on its finding that the fees were excessive ruled:

Failure to Provide an Itemized Accounting of Fees:

In response to a request for an accounting of fees the respondent provided a brief description of activities and dates, but no entries regarding time spent on an activity or whether conducted as executor or attorney for the estate. The Court found that:

The Rule provides that “upon request by the client or third person, [a lawyer] shall promptly render a full accounting regarding such property.” SCR 3.130- 1.15(b) (emphasis added). We are persuaded that in the context of a lawyer providing an accounting of fees charged to a client, fundamental to that process is a reflection of the time spent on each of the relevant tasks. …. Only in this way may a client assess whether the charges are reasonable so as to further pursue relief.

The foregoing captures the key points of the opinion. It is essential to read the full opinion to gain all the guidance the Court provides and appreciate the extent of the Court’s emphasis on strict accountability when dealing with client and third-party funds. Do not serve as executor and attorney for an estate before you read and study Kentucky Bar Association v. Jacobs.