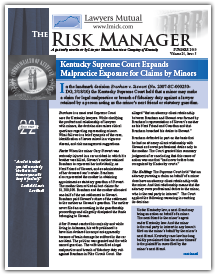 In the landmark decision Branham v. Stewart (No. 2007-SC-000250-DG, 3/18/10) the Kentucky Supreme Court held that a minor may make a claim for legal malpractice or breach of fiduciary duty against a lawyer retained by a person acting as the minor's next friend or statutory guardian.

Branham is a must read Supreme Court case for Kentucky lawyers. While clarifying the professional relationship of lawyers with minors, the decision also raises ethical questions regarding representing minors. What follows is a brief synopsis of the case, identification of issues raised in a vigorous dissent, and risk management suggestions.

Facts: When the minor Gary Stewart was seriously injured in a car accident in which his brother was killed, Stewart’s mother retained Branham to represent her individually, as Next Friend of Stewart, and as administrator of her deceased son’s estate. Branham also represented the mother in obtaining appointment as statutory guardian of Stewart. The mother then settled all tort claims for $1,300,000. Branham and the mother allocated one-half of the net settlement to Stewart. Branham paid Stewart’s share of the settlement to the mother as Stewart’s guardian. The mother never filed an accounting in the guardianship proceedings and allegedly dissipated the funds belonging to Stewart.

After Stewart reached his majority and living in Arkansas, Stewart’s wife petitioned to have Stewart declared incompetent because of brain damage suffered in the car accident. The petition was granted and the wife named guardian. The wife then filed a legal malpractice and breach of fiduciary duty suit against Branham in Pike Circuit Court. She alleged “that an attorney-client relationship between Branham and Stewart was formed by Branham's representation of Stewart's mother as his Next Friend and Guardian and that Branham breached his duties to Stewart.”

Branham defended in part on the basis that he had no attorney-client relationship with Stewart and owed professional duties only to the mother. The Court granted him summary judgment after concluding that this cause of action was one that “had never before been recognized by Kentucky courts.”

The Holding: The Supreme Court held “that an attorney pursuing a claim on behalf of a minor does have an attorney-client relationship with the minor. And that relationship means that the attorney owes professional duties to the minor, who is the real party in interest.” The Court applied the following reasoning in reaching its decision:

And we perceive no conflict between an attorney furthering the interests of the minor or ward and any duties the attorney would owe the person who retained the attorney in the capacity as next friend or guardian. The role of both the next friend and the guardian is to protect and further the minor's or ward's interests. Indeed, not protecting the ward's interests exposes the guardian to potential liability for breach of fiduciary duty and other claims….

On the other hand, were we to hold that the attorney retained by the individual acting in the capacity as next friend or guardian was not the attorney for the minor or ward, the minor or ward would be unrepresented, which would be contrary to the clear legislative intent to protect minors. Surely the Kentucky General Assembly did not enact a comprehensive legislative scheme concerning appointing guardians to further the "best interest" of minors, yet, intend for these minors to be unrepresented in litigation filed or settled on their behalf. (footnotes omitted)

The Dissent: In his dissent Justice Scott pointed out the serious problems he sees with the majority opinion “extending the attorney-client relationship with a guardian to the ward of the guardian actually represented.”

Be sure to read the dissent as well as the majority opinion for a full appreciation of the added complexity of representations involving minors.

Managing the Risk: It is hard to miss the point of Branham that when the real party in interest in any action is a minor, lawyers engaged in representing that interest have an attorney-client relationship with the minor with all attendant ethical duties. Accordingly, it is recommended: