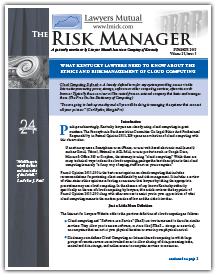 A few years ago the Kentucky Commission on Military Affairs estimated that there were 24,000 military retirees and family members living in Kentucky receiving $370,000,000 in retirement benefits. No doubt those numbers are even larger today. In this era of “Grey Divorce” the odds are that you will be asked to represent one of the spouses in a military retiree divorce. Getting the division of the retirement pension wrong is a malpractice error that can result in a huge liability when multiplied over the life of the parties.

The recent Kentucky Court of Appeals decision in Copas v. Copas (Nos. 2009-CA-000685-MR, 2009-CA-000720- MR (2/3/2012)) is an instructive opinion that is the place to start in coming up to speed on the USFSPA. The case concerned a divorce that occurred at the time Richard had served 21 years and 9 months on active duty during the marriage. He continued to serve on active duty after the divorce retiring with 30 years of active service. The family court’s property order ruled that the amount of Richard’s military pension attributable to the marriage (21 years and 9 months) be divided equally between Richard and his former wife, Kathy.

Several years prior to Richard’s retirement, and contrary to the court’s finding, Kathy requested the Defense Finance and Accounting Service (DFAS) to award her 50% of Richard’s 30-year pension when he retired.

Upon Richard’s retirement, and for reasons not clear, DFAS approved this request and awarded Kathy 50% of his pension based on 30 years of service and not on of 21 years and 9 months as ordered by the family court.

The case was further complicated by a monthly reduction of $568.00 in Richard’s military pension based on the Veterans Administration (VA) finding that he was 40% disabled. This amount was then paid to Richard by the VA leaving the husband with the same amount of pension, but from two different sources.

In a series of motions beginning in 2007 Richard asked the family court to direct DFAS to compute Kathy’s share based only on 21 years and 9 months of service. Kathy countered by asking for 50% of the pension based on 30 years of service and also asked that her share be calculated including the disability payment from the VA.

The family court modified its order to instruct DFAS that Kathy was to receive 50% of the pension based only on 21 years and 9 months of service. It also instructed DFAS to take the disability payment into consideration in its computation of Kathy’s share of the pension. Both parties challenged the court’s ruling via an appeal and cross-appeal.

In sorting out this confusing situation the Court of Appeals provides Kentucky lawyers with something of a clinic on the USFSPA complete with numerous citations covering both substantive and procedural issues. In short, the Court concluded that Kathy was entitled only to share in the portion of Richard’s pension attributable to the 21 years and 9 months of marriage during his service. She was not entitled to any part of the pension he earned after the divorce. Additionally, in the face of clear law on point, the Court held that the VA disability pay was not subject to the USFSPA and she was not entitled to share in it.

We urge you to read and download this opinion for future reference. The DFAS publication on dividing military retired pay cited in the opinion is available on the Internet at http://www.dfas.mil/garnishment/usfspa/attorneyinstructions.html. On reaching the site click on “Guidance for dividing retired pay and sample language for court orders.” We also recommend downloading this 20-page guide and making it a part of your USFSPA file.