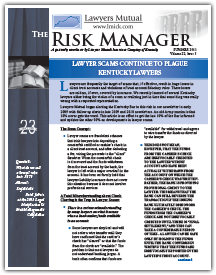 Our Summer 2003 newsletter includes the article “Another One Bites The Dust! Civil Rule 8.01 Takes Out Plaintiffs (And Their Counsel)” by Ruth H. Baxter. The article begins with this description of the malpractice issue:

You only have to pick up a copy of Kentucky Trial Court Review to read of another plaintiff’s counsel ignoring the Supreme Court decision of Fratzke vs. Murphy (Ky., 12 S.W.3d 269 (2000)) by failing to supplement the client’s answers to interrogatories to state the exact amount of damages, type of damages or both. The result is case dismissal during trial or on appeal. In five reported civil trials this year from a dismissal last January during plaintiff’s opening remarks in a Rowan County suit involving motor vehicle injuries to the most recent dismissal following the parties’ opening statements in a personal injury lawsuit in McCracken County, trial courts granted defense motions to dismiss plaintiff’s claims for failure to answer or supplement CR 8.01(2) interrogatories. Not only is the attorney left explaining to clients why they will never see their day in court, the attorney is now exposed to a significant malpractice claim for failing to follow a well-established rule of civil procedure.

In this case the Kentucky Court of Appeals appears to have interpreted Fratzke in a way that offers plaintiff lawyers relief for failing to amend damages interrogatories seasonably as required by CR 8.01(2), and exposes defense lawyers to claims when they rely on the absence of plaintiff's compliance rather than getting witnesses to dispute damages. The following extract from Engle addresses the Fratzke issue:

The trial in this matter concluded on October 9, 2009. After the close of evidence at trial, but before the matter was submitted to the jury, Engle moved to supplement his answers to Baptist’s interrogatories because he wished to specify a sum of punitive damages for the jury to consider. Baptist objected, contending that Kentucky Rule(s) of Civil Procedure (CR) 8.01(2) precluded Engle from supplementing his interrogatories at that time. In support, Baptist cited Fratzke v. Murphy, … which “recognized that a trial court can authorize answers or supplemental answers to interrogatories for good cause, as late as during the trial itself.4 Baptist urged that Engle’s motion was untimely because both sides had already finished presenting their cases. Nevertheless, the trial court granted Engle’s motion to supplement his answers to Baptist’s interrogatories, and the question of punitive damages was submitted to the jury.

In its cross-appeal, Baptist repeats its argument that Engle’s motion was improper solely because it occurred after both sides had presented their respective cases. Baptist urges that, should we remand this matter, Engle should be precluded from seeking punitive damages upon retrial.

However, Baptist presents no authority supporting that a motion to supplement answers to interrogatories is improper within the meaning of Fratzke if it is made after the close of evidence but prior to submitting a matter to the jury. Moreover, Fratzke merely holds that a motion to supplement answers to interrogatories may be granted as late as during trial. We have determined that a new trial is warranted in this matter, the new trial in this matter has yet to occur, and Baptist presents no authority that would prohibit Engle from moving to supplement his answers during the course of retrial. Therefore, we find no error in the trial court’s decision to grant Engle leave to amend his answers to Baptist’s interrogatories.

The Court of Appeals may have confused its interpretation of Fratzke by noting at the end of the decision that there will be a retrial and there was no authority before it that would prohibit Engle from amending interrogatories at the retrial. The following language from Fratzke may avoid this confusion:

We note that nothing in the rules precludes a trial court from entertaining a motion to supplement answers to interrogatories after trial has commenced.   However, Fratzke never made such a motion.   Nor is there anything in the record to indicate that she in any way brought her supplemental answers to the attention of the trial court.   Therefore, we hold that Fratzke's attempt to supplement her answers to interrogatories to include amounts claimed for unliquidated damages, which was made on the last day of trial and without leave of court, was ineffective.