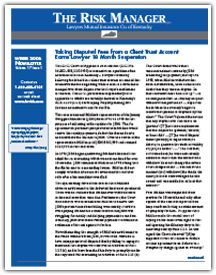 Kentucky allows screening by a firm to avoid disqualification for a conflict of interest when the only reason for disqualification is a former client conflict by a current member of the firm. The disqualified member must be screened, receive no part of fees from the representation, and the client must be notified in writing (SCR 3.130 (1.10 (d)).

Two cases in other states show how ineffective screens can lead to a malpractice claim or disqualification: