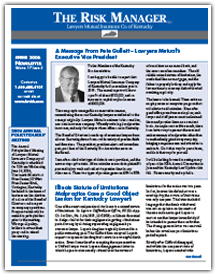 One of the surest malpractice claim losers is a missed statute of limitations. In Lopez v. Clifford Law Offices, PC (Ill. App. Ct. 1st Dist., No. 1-04-1805, 12/12/05) an Illinois firm tried to dodge a bullet for their negligence in getting a limitations period wrong by claiming superseding negligence by a successor lawyer. Lopez’s daughter tragically drowned in a public swimming pool. The Clifford firm accepted Lopez’s request to represent the daughter’s estate in a wrongful death action. Several months after accepting the representation a Clifford lawyer wrote Lopez a disengagement letter in which Lopez was incorrectly advised that the statute of limitations for the action was two years. In fact, because the defendant was a municipality, the statute of limitations was only one year. The letter included language that the firm’s withdrawal was not an opinion on the merits of the case and encouraged Lopez to contact another lawyer immediately if he intended to pursue the case further. The disengagement letter was sent well before the actual one year limitations period expired.

In the ensuing malpractice suit Clifford defended arguing “that the malpractice action against them could not stand because they terminated the attorney-client relationship with Lopez within the one-year limitations period when the wrongful death action was still viable and … Loran’s ‘intervention’ within that one-year period extinguished any duty the Clifford defendants owed to Lopez.” The lower court agreed and granted Clifford’s motion to dismiss.

On appeal Clifford again argued that the case was still viable when they disengaged and that “[a]t a minimum, Loran, by declining the case after consultation, was responsible for advising Lopez as to the exact amount of time remaining on the limitations period.” This superseding negligence was an intervening fact that broke the chain of causation for any damages. In rejecting this argument the appellate court first noted that a lawyer, who after a preliminary consultation, declines to accept a prospective client’s case does not assume responsibility and liability for a prior lawyer’s negligence. The court found that Lopez had not retained a successor lawyer until after the limitations period had expired and that lawyer could not have repaired Clifford’s negligence. The court remanded the case on the basis that “since no superseding cause operated … to defeat the Clifford defendants’ liability as a matter of law, proximate cause … should be decided not as a matter of law, but by a trier of fact.”

Of course, all of this could have been avoided simply by getting the limitations period right in the first place. Fortunately, Kentucky lawyers have a new resource for just this purpose that Lawyers Mutual was pleased to help with funding. It is the UK/CLE’s Kentucky Statutes of Limitations and Time Standards 2005 Deskbook. Every practice regardless of size should have a copy of this invaluable publication to assure competent service to clients and as part of their risk management program. For information on purchasing this publication call the UK College of Law Office of Continuing Legal Education at (859) 257-2921 or visit their Website.

A final risk management lesson from the Lopez case is that Loran, in declining the representation after Clifford disengaged, used a letter of nonengagement. This letter was key to establishing that he had declined representation, had given only generic advice about statute of limitations considerations, and had not given any negligent advice that would have caused him to be liable for missing the limitation period. We strongly recommend that you always use letters of nonengagement for declined representations that are often best sent by certified mail, return receipt requested. A good nonengagement letter: