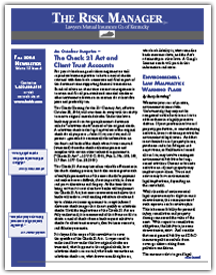 One clear national trend is that lawyers are encountering more problems when representing older adults. The obvious reason for this is that older adults are increasing in number at a record pace – they constitute a growing part of the client base and as they live longer are bringing more complex matters for resolution. What follows are three recent older adult sensitive cases considered in other jurisdictions:

If you find yourself in a delicate situation when representing an older adult, use the KBA Ethics Hotline as a first line of defense. For more on professional responsibility and older adult representation read the KBA Bench & Bar article “Golden Oldies, The Graying of Professional Responsibility” available on our web site, www.lmick.com, in the Risk Management section.