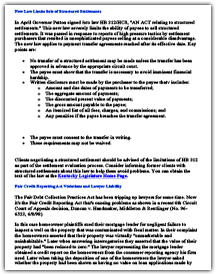 In this case homeowner plaintiffs sued their mortgage lender for negligent failure to inspect a well on the property that was contaminated with fecal matter. In their complaint the homeowners asserted that their property was “virtually unmarketable and uninhabitable.” Later when answering interrogatories they asserted that the value of their property had “been reduced to zero.” The lawyer representing the mortgage lender obtained a credit report on the homeowners from the consumer reporting agency his firm used. Later when taking the deposition of one of the homeowners the lawyer asked whether the property had been shown as having no value on loan applications made by the plaintiffs after suing the mortgage lender and why a prior existing mortgage had not been listed as a liability on the application for the loan from the defendant. From these questions the homeowners suspected and confirmed that the lawyer had obtained a credit report on them. They then sued the lawyer for violation of the FCRA (15 U.S.C. §§ 1681 et seq.) alleging that the report was ordered under false pretenses.

The lawyer defended on the basis that the credit report request was a “legitimate business need for the information in connection with a business transaction involving the consumer.” His motion at trial for summary judgment was granted and the homeowners appealed. The 6th Circuit found that while lawyers could request credit reports for use in the few situations covered in §1681b, the less connected a suit is to debt collection the greater the risk that the request will violate the FCRA. Here the homeowners’ action concerned alleged negligence of the lender – not the granting of a loan in a business transaction between the parties. Preparing to defend a negligence action is not generally a legitimate business need in connection with a business transaction. Summary judgment was reversed and the case returned to the trial court for further proceedings on the merits.

This opinion analyzes how the FCRA should be construed, has useful cites, and includes pertinent legislative history which helps better understand how the Act has evolved. Because the FCRA is a consumer protection law that has a built in cause of action for violations, it represents yet another significant area of liability risk for lawyers. If you are getting credit reports, it is well worth a read.