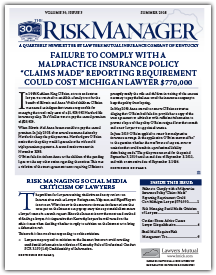 Failure to Comply with a Malpractice Insurance Policy “Claims Made” Reporting Requirement Could Cost Michigan Lawyer $770,000

In 1998 Kathleen King O’Brien, a trusts and estates lawyer, was retained to establish a family trust for the benefit of Silverio and Anna Vitellos’ children. O’Brien was named as independent trustee responsible for managing the trust’s only asset of a $1,000,000 Hartford life insurance policy. The Vitellos were to pay the annual premium of $25,000.

When Silverio died Anna became unable to pay the annual premium. In July 2008, after several accommodations by Hartford to keep the policy current, Hartford gave O’Brien notice that the policy would lapse unless the wife could triple premium payments. A second notice was sent in November 2008.

O’Brien failed to inform Anna or the children of the pending lapse or take any other action regarding the notices. This was a violation of the trust agreement terms requiring O’Brien to promptly notify the wife and children in writing of the amount necessary to pay the balance owed the insurance company to keep the policy from lapsing.

In May 2009 Anna moved to remove O’Brien as trustee alleging that O’Brien had failed to provide her a copy of the trust agreement or advise her with sufficient information to prevent a lapse of the policy. O’Brien resigned later that month and a new lawyer was appointed trustee.

In May 2011 O’Brien was sued for malpractice by the beneficiaries of the trust. O’Brien notified the Hartford of the claim. Hartford denied coverage “… after concluding that, as of the effective date of her insurance policy (September 3, 2010), O’Brien could have foreseen (and did not disclose on her application form) that she would be subject to a malpractice claim for her performance as independent trustee of the Vitello trust.”

In a state probate court action the judge ruled that the malpractice claim was covered by the policy and awarded the plaintiffs $770,065.42. The plaintiffs attempted to collect the judgment from Hartford by writ of garnishment in state court. Hartford removed the case to federal district court. There it was held that the Hartford policy did not cover the claim.

Upon appeal to the 6th Circuit, the court made short work of the coverage question with this clear analysis of how a Claims Made insurance policy should be construed:

Michigan courts enforce an insurance contract’s “clear and precise” terms as they are written. The terms of O’Brien’s malpractice insurance policy were straightforward: Hartford agreed to indemnify O’Brien for any “damages” stemming from a “claim first made against” O’Brien “during the ‘policy period’ and reported in writing to [Hartford] immediately [.]” Here, in May 2011, the plaintiffs asserted against O’Brien a claim that fell in the middle of the contract’s “policy period,” which ran from September 2010 to September 2011. O’Brien then timely reported the claim in writing to Hartford for indemnification. The problem, however, is that the contract expressly disavowed indemnification for claims arising from an act or omission where the insured,

“[a]s of the effective date of [the contract], knew or could have foreseen that such act, error, [or] omission could result in a ‘claim’ [.]”  And when the contract took effect in September 2010, O’Brien had every reason to foresee that her nonfeasance as trustee of the Vitello trust – nonfeasance that resulted in her forced resignation in May 2009 – might give rise to a malpractice claim against her. Thus, in accordance with the plain terms of the contract, Hartford denied coverage. The district court was right to read the contract the same way that Hartford did. Thomson v. Hartford Casualty Insurance Company, U.S. Ct. of App., 6th Circuit., No. 15-1501, July 28, 2016 (unpublished)

When Should You Report a Claim or Potential Claim to Lawyers Mutual?

All lawyers’ malpractice policies include the requirement to give the insurer notice of claims and to cooperate. This contractual requirement in no way overrides the professional responsibility duties owed the client. The three different types of insurer notice are:

This is the teaching point of Thomson v. Hartford. Had O’Brien reported the nonfeasance as a potential malpractice claim on her 2010 application for a new policy, she would have been covered by Hartford for malpractice in 2009. The only way to assure compliance with the Claims Made feature of a legal malpractice insurance policy is to report claims and potential claims promptly and always be mindful of when a current policy is due to expire. Always carefully complete application forms for the next year’s coverage by including any known claims or potential claims.

Reporting a Claim or Potential Claim

Lawyers Mutual encourages early reporting of claims and potential claims for the purpose of helping in assessing the merits of a claim, assisting in notifying the client, and having the earliest possible opportunity to conduct claims repair.

At Lawyers Mutual error reporting costs nothing. Neither your deductible nor your annual premium will be affected in any way by reporting claims and potential claims in any number. Help from our claims counsel is policy service at no charge to insured lawyers.

All insurance policies contain provisions on when and how to report a claim or potential claims. While telephonic reports are useful for immediate assistance, claims should be reported in writing as well. Requirements for written reports are names of claimants, date the alleged error was discovered, summary of the circumstances, estimate of the potential liability, copies of relevant documents, and the insured lawyer’s views on defenses or claims repair that may be available. Lawyers Mutual’s insured lawyers should go to lmick.com, click on Claims & Incidents, and follow the instructions there for reporting a claim or potential claim.

An additional benefit of early reporting is the claim or potential claim will be covered by the policy limits of the policy in-force at the time of the report. This is more important than you may realize because our policy is an annual claims made policy. If a claim is paid or an incident ripens into a claim in a later policy year, it will be covered by the liability limits of the policy in-force at the time the claim or incident was reported. Any payment will not reduce the limits of the later policy. The result is that claims and potential claims reporting increase the limits of coverage available to pay claims.

Your goals when a claim or potential claim occurs should be to fix the problem, meet ethical requirements of client communication, treat the client fairly, and keep the client with your firm. Early error reporting is a strong first step in meeting all these goals.