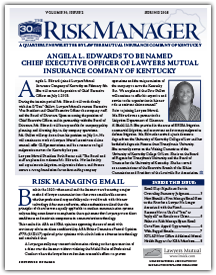 Todd signed a notice of withdrawal from Cesso’s divorce action on July 25, 2008. After the action was tried by successor counsel, Cesso sued both Todd and successor counsel for malpractice. Todd defended the suit claiming that his representation of Cesso ceased on the date he signed the notice of withdrawal. The trial court granted his motion for summary judgment. The appellate court reversed the summary judgment in part. The facts showed that Cesso copied Todd on seven emails sent to successor counsel after July 25, 2008. These emails requested that Todd appear at upcoming hearings with successor counsel, requested a conference call with both lawyers to discuss team strategy, and requested a clarification of the roles between the two lawyers now that Todd was withdrawing. Todd did not respond to the emails. The appellate court found that: “On this record, reasonable persons could differ as to the existence of an attorney-client relationship so this issue must be resolved by the trier of fact.” (Cesso v. Todd, 92 Mass. App. Ct. 131 (8/ 28/2017))

Good risk management requires that once a client-attorney relationship is terminated there should be no further contact regarding the merits of the matter with the former client to avoid creating a reasonable expectation on the former client’s part that the lawyer continues to represent him. Email and other social media communications are too easily sent that create misleading impressions of representation.