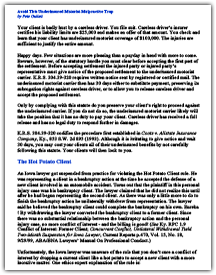 An Iowa lawyer got suspended from practice for violating the Hot Potato Client rule. He was representing a client in a bankruptcy action at the time he accepted the defense of a new client involved in an automobile accident. Turns out that the plaintiff in this personal injury case was his bankruptcy client. The lawyer claimed that he did not realize this until after he had begun representing the second client. As there was only a little more to do to finish the bankruptcy action he unilaterally withdrew from representation. The lawyer said he believed the bankruptcy client could complete the bankruptcy on his own. Eureka ! By withdrawing the lawyer converted the bankruptcy client to a former client. Since there was no substantial relationship between the bankruptcy action and the personal injury case, no more conflict of interest - and the billing is good! (See Ky. RPC 1.9 Conflict of Interest: Former Client; Concurrent Conflict, Unilateral Withdrawal Yield Two-Month Suspension for Iowa Lawyer, Current Reports p.470, Vol. 15, No. 18, 9/29/99, ABA/BNA Lawyers’ Manual On Professional Conduct.)

Unfortunately, the Iowa lawyer was unaware of the rule that you don’t cure a conflict of interest by dropping a current client like a hot potato to accept a new client with a more lucrative matter. One ethics expert explanation of the rule is:

"The most obvious problem is a moral one: the lawyer’s motivation is patently base and disloyal to the abandoned client. Courts, obviously motivated by concern over the lawyer’s disloyalty, have spoken with one voice. The now widely accepted rule is that a lawyer who withdraws – whether otherwise in conformity with the lawyer code or rules or not – from representing a current client for the purpose of proceeding adversely to the client on behalf of another client does not thereby convert the representation into that of a former client." (footnotes omitted) (Wolfram, Former Client Conflicts, 10 Geo. J. Legal Ethics 677, 708(1998))

When a lawyer accepts a client there is a fiduciary obligation of loyalty to complete the work if at all possible. Withdrawal is appropriate only for compelling professional reasons. Fee optimization doesn’t meet the test. If you inadvertently find yourself representing two clients resulting in an unconsented conflict of interest, your professional responsibility requires withdrawal from both representations. If you violate the Hot Potato Client rule, you risk a malpractice suit in addition to a conflict of interest disciplinary action. A lawyer’s worst nightmare is a conflict of interest malpractice suit. The plaintiff stresses the lawyer’s betrayal and the jury will do the rest.