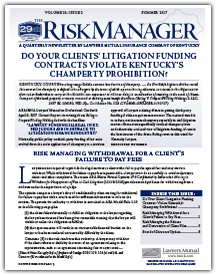 At common law champerty is defined to be a bargain by the terms of which a person having otherwise no interest in the subject matter of an action undertakes to carry on the suit at his own expense or to aid in so doing in consideration of receiving, in the event of success, some part of the land, property or money recovered or deriving some benefit therefrom. (Boling V. Prospect Funding Holdings, LLLC, 2017 BL 104180, W.D. Ky., Civil Action No. 1:14-CV-00081-GNS-HBB, 3/30/17.)

Nationally, public policy on third-party funding of law suits evolved from the strict application of champerty to a cautious approval of lawyers assisting clients in getting third-party funding if ethics requirements are met. The national trend is to reduce, not increase champtery, especially in civil litigation matters. Some states specifically revoked champerty laws and others take a relaxed view of litigation funding, if seen in the best interest of the client. Boling reverses this trend for Kentucky lawyers. Boling was burned when a gas can exploded. He was in a coma for six months, had full thickness burns over 40% of his body, and spent six months in the hospital. Boling and his wife sued the gas can manufacturer.

During the litigation the Bolings borrowed money from two lenders secured by Boling’s prospective recovery from the gas can manufacturer. Five different loans were made for a total of $30,000. The terms of the original loan provided that the funds were for the necessities of life or medical care. The agreements further recognized that the funds were needed so Boling would have time to seek justice through the courts or negotiations. The lender specifically provided in the loan contract that it “wishes to make an investment and purchase the Proceeds in the Plaintiff’s Action ….” The loans were to accrue interest at the rate of 4.99% a month.

On June 19, 2014 Boling filed suit for a declaratory judgment that the loan agreements were unenforceable under Kentucky law. The Court calculated that as of August 22, 2014 the amount owed the lender was $340,405.

Boling provides a thorough analysis of the status of champerty in Kentucky including public policy and ethics considerations. The following extracts from the opinion provide an overview of the opinion:

Boling provides a comprehensive review of champerty in Kentucky supported by extensive case and law citations. We urge all Kentucky lawyers to read it. We also recommend you review your client files for any indication of litigation funding arrangements that are unenforceable in Kentucky. This information should be an affirmative defense when a lender attempts to enforce such a contract.