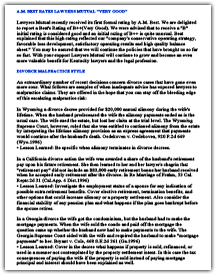 An extraordinary number of recent decisions concern divorce cases that have gone even more sour. What follows are samples of when inadequate advice has exposed lawyers to malpractice claims. They are offered in the hope that you can stay off the bleeding edge of this escalating malpractice risk:

In Wyoming a divorce decree provided for $20,000 annual alimony during the wife’s lifetime. When the husband predeceased the wife the alimony payments ended as is the usual case. The wife sued the estate, but lost her claim at the trial level. The Wyoming Supreme Court, however, ruled that she was entitled to continued alimony from the estate by interpreting the lifetime alimony provision as an express agreement that payments would continue after the husband’s death. Oedekoven v. Oedekoven, 920 P.2d 649 (Wyo.1996)

In a California divorce action the wife was awarded a share of the husband’s retirement pay upon his future retirement. She then learned to her and her lawyer’s chagrin that “retirement pay” did not include an $83,000 early retirement bonus her husband received when he accepted early retirement after the divorce. In Re Marriage of Frahm, 53 Cal. Reptr.2d 31 (Cal.App. 4 Dist.1996)

The Ninth Circuit recently ruled that a husband who moved out of the matrimonial home before the divorce and before the home was sold as part of the property settlement cannot roll over his share of the capital gain when he buys a new home. Perry v. C.I.R., 91 F.3d 82 (9th Cir.1996)