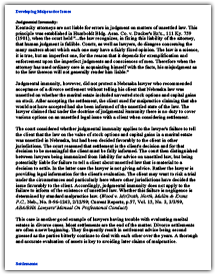 Judgmental Immunity:
Kentucky attorneys are not liable for errors in judgement on matters of unsettled law. This principle was established in Humboldt Bldg. Assn. Co. v. Ducker's Ex’r., 111 Ky. 759 (1901), when the court held “… the law recognizes, in fixing this liability of the attorney, that human judgment is fallible. Courts, as well as lawyers, do disagree concerning the many matters about which each one may have a fairly fixed opinion. The law is a science, it is true, but an imperfect one, for the reason that it depends for exemplification and enforcement upon the imperfect judgments and consciences of men. Therefore when the attorney has used ordinary care in acquainting himself with the facts, his misjudgment as to the law thereon will not generally render him liable.”

Judgmental immunity, however, did not protect a Nebraska lawyer who recommended acceptance of a divorce settlement without telling his client that Nebraska law was unsettled on whether the marital estate included unvested stock options and capital gains on stock. After accepting the settlement, the client sued for malpractice claiming that she would not have accepted had she been informed of the unsettled state of the law. The lawyer claimed that under the doctrine of judgmental immunity there is no duty to cover various options on an unsettled legal issue with a client when considering settlement. The court considered whether judgmental immunity applies to the lawyer's failure to tell the client that the law on the value of stock options and capital gains in a marital estate was unsettled in Nebraska, but had been decided favorably to the client in other jurisdictions. The court reasoned that settlement is the client's decision and for that decision to be meaningful the client must be fully informed. The court then distinguished between lawyers being immunized from liability for advice on unsettled law, but being potentially liable for failure to tell a client about unsettled law that is material to a decision to settle. In the latter case the lawyer is not giving advice. Rather the lawyer is providing legal information for the client's evaluation. The client may want to risk a trial under the circumstances and particularly here where other jurisdictions have decided the issue favorably to the client. Accordingly, judgmental immunity does not apply to the failure to inform of the existence of unsettled law. Whether this failure is negligence is determined by standard malpractice law. (Wood v. McGrath, North, Mullin & Kranz P.C., Neb., No. S-96-1243, 2/12/99; Current Reports, p.57, Vol. 15, No. 3, 3/3/99, ABA/BNA Lawyers' Manual On Professional Conduct) This case is another good example of lawyers having trouble with evaluating marital estates in divorce cases. Most settlements are the end of the matter. Divorce settlements are often a new beginning. They frequently result in settlement advice being second guessed as the parties bitterly continue to deal with each other over the years. A thorough and accurate evaluation of assets is key to avoiding later claims of malpractice.

Settlements:
Based on a Maryland lawyer’s recommendation a client accepted a $2,500 settlement in a lead paint poisoning suit. Twelve years latter the client sued the lawyer for malpractice claiming that the settlement was grossly inadequate and that no reasonable lawyer would have recommended it. The client received a jury award of $125,000 based on what the client would have received if the case had been tried. The trial judge threw out the verdict ruling that the award should have been based on what a reasonable settlement would have been -- not what the award would have been if the case had been tried on the merits. The Maryland Court of Appeals joined the growing number of states that hold that lawyer negligence in settlement negotiations is a basis for a malpractice claim by reinstating the $125,000 verdict. The Court found that the standard elements of legal malpractice– neglect, proximate cause, damage – apply to settlements and that the proper measure of damages is not what a reasonable settlement would have been. Rather damages are determined by litigating before the malpractice jury the merits of the underlying case that was never tried (the case-within-a-case). (Thomas v. Bethea, Md.; No. 7, 10/9/98; Current Reports, p.511, Vol. 14, No. 21, 11/11/98, ABA/BNA Lawyers’ Manual On Professional Conduct)

Does Your Client Have Insurance For Litigation Expenses??
In our last newsletter Bob Breetz alerted you to the need to read a client’s fire policy for contractually shortened periods of limitation to bring suit and for requirements that the client/insured give a sworn statement to the insurance company. A New York law firm learned the hard way that you also need to read a client’s comprehensive general liability policy to investigate whether the client has insurance to cover litigation expenses. The firm represented the client in patent and trademark infringement cases charging substantial fees. The client initially paid some of the firm’s fees, but after running up an unpaid bill of almost $150,000 was sued by the firm for fees, costs, and interest of $206,954.

The client counterclaimed for malpractice for failure of the firm to advise that the client's comprehensive general liability insurance policies might pay litigation expenses. The lawyers who replaced the firm immediately raised this possibility that insurance may cover litigation costs. Upon inquiry the insurer agreed to cover litigation costs going forward, but denied coverage for all prior litigation expenses. The client claimed that there would have been no litigation expenses if the firm had met its duty to minimize liability by investigating the availability of insurance. The court concluded that "the plaintiff's failure to investigate the defendants' insurance coverage or alert them to the potential availability of insurance to cover their litigation expenses may have constituted legal malpractice. The issue whether the plaintiff committed legal malpractic raises numerous question of fact, including but not limited to, the sophistication of each party regarding potential insurance coverage and the scope of the plaintiff's engagement. It is particularly noteworthy that counsel who succeeded the plaintiff promptly pursued the insurance issue to the defendants' substantial benefit." The case was returned for trial. (Darby & Darby P.C. v. VSI Int'l Inc., N.Y. Sup. Ct., N.Y.County,9/15/98; Current Reports, p.468, Vol. 14, No. 19, 10/14/98, ABA/BNA Lawyers' Manual On Professional Conduct)

Lawyers often criticize risk management advice not to sue clients for fees. Nonetheless, the most consistent predictor of a malpractice claim is suing a client for fees. This case is just another example of how things can blow up when you do. In all likelihood not only will this firm not collect unpaid fees, but paid fees will have to be refunded. If you are determined to sue a client for fees, risk manager Stephen M. Blumberg recommends to first consider the following checklist: