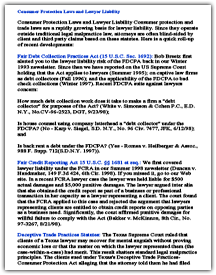 Consumer Protection Laws and Lawyer Liability Consumer protection and trade laws are a rapidly growing basis for lawyer liability. Since they operate outside traditional legal malpractice law, attorneys are often blind-sided by client and third party claims based on these statutes. Here is a quick roll-up of recent developments:

Fair Debt Collection Practices Act (15 U.S.C. Sec. 1692): Bob Breetz first alerted you to the lawyer liability risk of the FDCPA back in our Winter 1993 newsletter. Since then we have reported on the US Supreme Court holding that the Act applies to lawyers (Summer 1995); on captive law firms as debt collectors (Fall 1996); and the applicability of the FDCPA to bad check collections (Winter 1997). Recent FDCPA suits against lawyers concern:

Fair Credit Reporting Act 15 U.S.C. §§ 1681 et seq.: We first covered lawyer liability under the FCRA in our Summer 1998 newsletter (Duncan v. Handmaker, 149 F.3d 424, 6th Cir. 1998). If you missed it, go to our Web site. In a recent FCRA lawyer case the lawyer was held liable for $500 actual damages and $5,000 punitive damages. The lawyer argued inter alia that she obtained the credit report as part of a business or professional transaction in her capacity as a lawyer representing a client. The court found that the FCRA applied to this case and rejected the argument that lawyers representing clients are entitled to obtain credit reports on opposing parties as a business need. Significantly, the court affirmed punitive damages for willful failure to comply with the Act (Bakker v. McKinnon, 8th Cir., No. 97-3267, 8/21/98).

Deceptive Trade Practices Statutes: The Texas Supreme Court ruled that clients of a Texas lawyer may recover for mental anguish without proving economic loss or that the matter on which the lawyer represented them (the case-within-a-case) had merit. This result shatters standard legal malpractice principles. The clients sued under Texas's Deceptive Trade Practices-Consumer Protection Act alleging that the attorney told them he had filed their medical malpractice suit. In fact, he had not and the statute of limitations period passed. (Latham v. Castillo, Tex., No. 96-0986, 6/23/98). Without the DTPA the clients' only remedy was a standard malpractice action where their chances of recovery appeared remote.

State Consumer Protection Statutes: In 1994 an Illinois lawyer was sued for excessive fees under the state's consumer protection act. The law applies in commercial disputes such as those involving unscrupulous used-car dealers and home-improvement contractors. The Illinois Supreme Court recently rejected this novel effort to hold lawyers liable in a fee dispute. The Court held that lawyers are excluded from consumer protection laws because they are self-regulating professionals accountable for their actions through bar disciplinary procedures and malpractice actions (Cripe v. Leiter, Ill., No. 84117, 10/22/98).

The trend is not your friend. Public interest groups express growing dissatisfaction with self-regulation and malpractice law as too protective of lawyers. Plaintiff friendly consumer protection laws are expanding with built-in remedies that include punitive damages. Novel pleadings based on these laws snare lawyers along with many others. Even if you win, you lose - note that the Illinois case started in 1994 and is only now resolved. In the short run, good risk management means keeping up with state and federal consumer protection laws as they apply to lawyers. In the long run, the profession must address public dissatisfaction or expect legislative remedies that expand lawyer liability. Perhaps Kentucky's new lawyer disciplinary procedures will help.