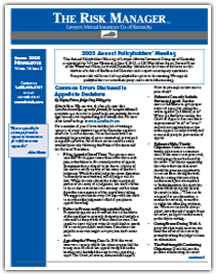 Editor’s Note: This article is the first of a series that LawReader.com has agreed to provide for Lawyers Mutual’s newsletter as a bar service. LawReader.com provides Internet legal research service specializing in Kentucky law. For more about LawReader go to www.LawReader.com.

For a number of years I have had the job of writing a synopsis of every decision issued by Kentucky appellate courts for LawReader.com. These decisions reveal an amazingly large number of errors committed at trial and in appellate practice. All of these errors could be easily avoided by merely following the Rules of Evidence and the Rules of Procedure.