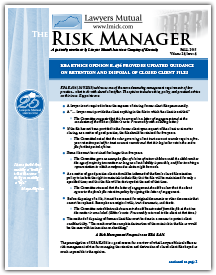 Too many lawyers do not like to send closing letters upon the conclusion of a representation. Some consider them an unnecessary administrative burden while others engage in what is known as passive marketing. The idea is that lawyers want clients to think of them as “their lawyer” who will return whenever they have new legal matters. A closing letter might discourage future contact. The risk in both approaches is that these lawyers may find long after thinking a representation was over that they have a client and don’t know it. It seem that the quiescent or straggler client always surfaces just after the statute of limitations has run. In an ensuing malpractice suit, if an attorney-client relationship is found, the client is usually an automatic winner. This article considers the risk management importance of closing letters both for completed representations and disengagement from representations. (Sample lawyer closing and disengagement letters are readily available on Google.)

Quiescent Clients
We covered the classic quiescent client malpractice case in a previous newsletter as follows:

In Jones v. Rambanco Ltd. (2006 WL 2237708, W.D. Wa 2006) The GTH law firm represented a subsidiary of a company in 2002 that it was now suing on behalf of its employees. The company moved to disqualify GTH claiming to still be a client from the representation of its subsidiary. GTH argued that the company was a former client because the subsidiary’s matter had settled in 2002 and the firm had not provided any legal services to the subsidiary since that time which was now over three years. The Court reasoned that some event inconsistent with an attorney-client relationship is necessary to conclude that a representation is terminated. The facts showed that GTH had never sent a closing letter to the subsidiary, had three inactive subsidiary files that GTH considered completed but had never been closed, was paying for storage of dozens of boxes of documents relating to the subsidiary’s dispute, had not notified the subsidiary when several lawyers who had worked on its matter left the firm, and assigned a new billing partner at that time for the subsidiary. Furthermore, the settlement agreement named GTH as the contact for any issues regarding the settlement agreement that did not expire until 2011. The Court ruled that these circumstances showed that GTH had the intention of a continuing representation of the subsidiary that required disqualification from representing the plaintiffs in the case against the parent.

Lesson Learned: As tempting as it is for the purpose of new business to foster the idea that a relationship continues once a matter is concluded, the best practice is to use closing letters to make crystal clear that the representation is over and that no further duties are owed the now former client. Had GTH followed this practice it would not have been disqualified because the subsidiary would have been a former client and there was no substantial relationship between the two cases. You are at the mercy of quiescent clients when you leave the situation dangling – and don’t expect mercy when accused of malpractice or a conflict of interest.

Gotay v. Breitbart (58 AD 3d 25 (2008)) is a good example of how law firm breakups, lateral hiring, and lawyer mobility can create a continuing representation leading to malpractice liability long after the statute of limitations would have run. Gotay involved a client’s medical malpractice case being handed off from one firm to a second firm and then to a third firm that made a lateral hire of the lawyer responsible for the case in the second firm. The third firm declined representation because of apparent error in bringing the suit. Gotay sued the first and second firm for malpractice. The upshot of the confusing facts of this case was that the second firm lost a statute of limitations defense because they had not clearly terminated their representation of Gotay when the lateral hire moved to the third firm. The following language from the opinion is instructive:

The Court of Appeals has recognized it as “essential that the terms of [attorney-client] representation . . . be set down with clarity.” …. Although the need for such clarity has most often been remarked upon in connection with fee disputes, it is no less critical to have an explicit and accurate understanding of any other fundamental issue pertaining to the attorney client relationship, including, obviously, the elemental issue of whether there is a relationship at all. There is no room for uncertainty on these matters, especially where, as here, attorneys deal with laypersons unversed in the nuances and intricacies of legal practice and expression; what may seem crystal clear to a lawyer may be utterly lost upon the client. If the attorney-client relationship has come to an end, that fact should be absolutely clear to all parties involved. (citation omitted)

Lesson Learned: One of the most important risk management benefits of closing disengagement letters is that they often establish the time for a malpractice statute of limitations to begin to run. This can be critical for withdrawing lawyers because the reason for withdrawal often involves the risk of a malpractice claim. A closing letter should be sent by a lawyer substituted in a litigation action even if the substitution is a matter of record. Without a closing letter, exposure to a malpractice claim can be virtually indefinite in some representations.

In Krutzfeldt Ranch LLC v. Pinnacle Bank (272 P.3d 635 (2012)) Hoskins advised Harris on tax matters in Harris’ representation of Krutzfeld who was suing Pinnacle. Hoskins then moved to the Crowley law firm that was representing Pinnacle in the suit. Some time prior to moving to Crowley, Hoskins sent a letter of engagement to Harris regarding the Krutzfeldt representation indicating the prospective nature of the services and a bill for services rendered. Subsequently Hoskins notified Harris of his move to Crowley in a letter that contained this language: “[w]e feel we will be more responsive and efficient to your needs and the ever changing tax and regulatory world by utilizing the resources that Crowley … has to offer.” Hoskins took no affirmative steps to terminate his representation with Harris of Krutzfeldt prior to his move to Crowley. A motion to disqualify Crowley for a current client conflict of interest was promptly made.

The motion was contested inter alia on the basis that the Krutzfeldt representation was over because when Hoskins moved to Crowley all his clients became former clients; that a final bill had been paid; and that Crowley had imposed a screen as soon as they learned of the conflict of interest issue. The Supreme Court of Montana found that the attorney-client relationship is not automatically terminated when a lawyer joins another firm; that the paid bill did not indicate that it was a final bill; and that the screen did not effectively protect Krutzfeldt from prejudice because Krutzfeldt was a current client of Hoskins when he joined Crowley. In disqualifying Crowley for a current client conflict of interest the Court reasoned as follows:

The critical fact here is that, even if grounds for withdrawal existed under the terms of his engagement letter, Hoskins did not withdraw from his representation of the Krutzfeldts prior to accepting his new position. He never informed the Krutzfeldts that his work for them had concluded, never terminated his representation of them, and never advised them he was contemplating joining Crowley. The “Dear Client” letter gave no indication the Krutzfeldts were no longer Hoskins’s client. To the contrary, the letter contemplated future legal services ….

Lesson Learned: Firms making lateral hires must make a detailed conflict of interest review of all the incoming lawyer’s current clients and former clients matters and cases. Even if Crowley had won on the basis that a current client conflict of interest did not exist because the representation was terminated, Crowley would have faced a disqualification motion because the substantial relationship test for disqualification under the former client conflict rule (in Kentucky SCR 3.130(1.9)) would appear to apply under the facts of this case.

A Closing Letter Checklist for a Completed Representation
Naomi C. Fujimoto in his article “How to Close a Case” (ABA General Practice, Solo and Small Firm Division Magazine, July/August 2010) offers this useful checklist for closing letters upon the completion of a matter:

Editor’s Note: We recommend that the closing letter also include the firm’s file retention and destruction procedures.

A Disengagement Closing Letter Checklist for Withdrawing from Representation
Editor’s Note: An update from the KBA Bench & Bar article “How To Fire A Client – The Client From Hell, Dog Cases, and Escape Clauses” available on Lawyers Mutual’s Website at lmick.com – click on Resources, Subject Index, Termination of Representation, and then on the article.

Whenever possible withdrawal should be a clean break – a clear-cut decision with the client’s agreement in writing. Use a disengagement letter that:

Finally, a complete copy of the file should be retained. A fired client or one that fired you has a high potential to be a malpractice claimant. The first line of defense is a complete file with a comprehensive disengagement letter. This is the best evidence for showing competent and ethical practice in terminating a client.