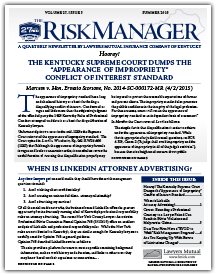 Treating fellow lawyers with professional courtesy is a primary standard of civility in the practice of law. Nonetheless, in doing so, care must be taken not to inadvertently create professional duties to those you do not consider clients. A recent disciplinary action against a District of Columbia lawyer vividly illustrates this risk (In re Fay, 2015 BL 74532, D.C., No.14-BG-7, 3/19/15).

In this action Carter was injured in an auto accident in the District of Columbia and retained attorney Chasnoff to represent him in his personal injury suit. Chasnoff was admitted to practice in Maryland and D.C., but his admission to practice in D.C. was suspended for failure to pay bar dues. For this reason, Chasnoff asked Fay, a member of the D.C. bar, to sign his name to and file a complaint in the D.C. Superior Court. The complaint showed both Chasnoff and Fay as attorneys. Chasnoff then failed to serve the complaint on the defendant resulting in the dismissal of the case. In spite of efforts by Fay to revive the case, it was ultimately dismissed with prejudice. Chasnoff was thereafter disbarred in Maryland and D.C., and a bar complaint filed against Fay.

Fay claimed that since he had no representation agreement with the client, he had no attorney-client relationship with him and owed him no duties. The D.C. Court of Appeals disagreed as follows:

It is critical that respondent authorized the filing of Mr. Carter’s complaint with his signature and bar number and later initiated and filed an additional pleading in which he identified himself as Mr. Carter’s attorney. As an officer and fiduciary, respondent represented to the court, through his filings, that an attorney-client relationship existed.

Moreover, respondent was aware that he was the only counsel of record in Mr. Carter’s case who was licensed to practice law in the District; respondent knew that Mr. Chasnoff ’s bar membership was inactive. Like local counsel facilitating the practice of an attorney admitted pro hac vice, respondent was responsible for Mr. Carter’s case in the event that Mr. Chasnoff failed to adequately pursue it.

The decision included this spot on advice:

We say again, in the hopes that our message will reach the ears of the whole Bar, that when an attorney undertakes to act on behalf of another person in a legal matter, no matter how pure or beneficent his original intention may have been, he invokes upon himself the entire structure of the Code of Professional Responsibility and its consequent enforcement through disciplinary proceedings.

The short truth of the matter is that the [C]ode does not, and [cannot], create two tiers of ethical obligations, one for attorneys acting formally and for gain, and another for those who act for other reasons. All attorneys must act in an ethical manner when they act as attorneys regardless of what motivates them to undertake the attorney-client relationship. In re Washington, 489 A.2d 452, 456 (D.C. 1985)

Fay was lucky in that his discipline was only an informal admonition. We doubt he will be so lucky in any malpractice claim.

Our prior newsletters include these two examples of lawyers learning that no good deed goes unpunished:

Too Accommodating: A California law firm learned the hard way that a single brief appearance as an accommodation to another lawyer creates an attorney client relationship with malpractice exposure. A firm lawyer, as a professional courtesy, appeared for the lawyer at a summary judgment motion hearing. When the lawyer’s client later sued for malpractice the “accommodating firm” was sued along with other defendants. The firm argued that it had not advised the client or become associated with the other lawyer. Rather they made a special appearance as the other lawyer’s agent on this single motion and owed no duties to his client. The court held “By appearing at a hearing in a case in which the attorney has no personal interest, the attorney is obviously representing the interest of someone else, such a person; the client’s attorney of record is not. We conclude that an attorney making a special appearance is representing the client’s interests and has a professional attorney-client relationship with the client.” Streit v. Covington & Crowe, Cal. Ct. App. 4th Dist., Division 2, No. E023862, 7/20/00.

Too Accommodating: Two attorneys practiced law in the same building, though not in the same law office. They were acquainted and on friendly terms. The first lawyer, who had successfully settled a case for his client, approached the second lawyer and asked him for the accommodation of depositing the settlement check in the second lawyer’s trust account so that everything could be finished that day. The second lawyer’s self-protection antennae should have tingled, but did not. The second lawyer had a good relationship with his bank and knew they would immediately credit his account with the deposited funds. He accepted the endorsed check and deposited it into his trust account. That same day he wrote a check to the first lawyer noting on it that it was for the first lawyer’s benefit and the benefit of his client.

No one reading this will be surprised to learn that the first lawyer cashed the check, did not take care of his client’s medical bills, did not give any money to his client, and was disbarred. The sad ending to this story is that the second lawyer was also sued, also had a bar complaint filed, and although “all he did was try to do a favor for a friend,” he lost that suit and was also disbarred (Hetzel v. Parks, 971 P. 2d 115 (1999)). The moral is that even the most innocent appearing accommodation of another lawyer, party, or nonclient can carry huge liability and disciplinary exposure. Sort of like buying Yahoo stock at $240 hoping it will go up to $250, but it is now at $15. The potential benefit just didn’t justify the risk of that much capital.