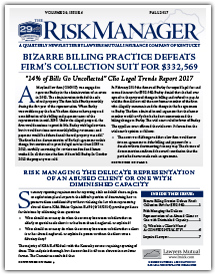 A Maryland law firm (OMNG) was engaged to represent Burley in the administration of an estate in 2002. The administration included the sale of real property. The firm billed Burley monthly during the first year of the representation. When Burley was unable to pay the fees, “the firm claims to have proposed a modification of the billing and payment terms of the representation in mid-2003. Under the alleged proposal, the firm would continue to provide Ms. Burley with legal services, but it would not issue new monthly billing statements, and payment would be deferred until the real property was sold.” The firm had no documentation of Burley’s agreement to this change, but continued to provide legal services from 2003 to 2012, carefully accounting for services rendered and hours worked. In all that time the firm did not bill Burley. In October 2012 the property was sold.

In February 2015 the firm sued Burley for unpaid legal fees and accrued interest for $332,569. Burley denied that she had ever agreed to the proposed change in billing and refused to pay. At trial the firm did not call the now former member of the firm who allegedly communicated the change in the fee agreement to Burley. The firm admitted in oral argument that the former member would testify that he had not communicated the billing change to Burley. The trial court ruled in favor of Burley.

The appellate court summed up its affirmation of the trial court’s opinion in this paragraph:

An unusual case like O’Malley demonstrates how a seemingly routine business function like billing can be risky. When billing goes bad and a firm decides to sue for fees, the risk of a counter-suit for malpractice is further increased. This prompts us to offer our risk management advice for smart billing and avoiding costly and time-consuming efforts to get paid.

The first risk management action to take with every new matter is the preparation of a comprehensive letter of engagement including fee terms and conditions. A fee agreement at a minimum should:

* ABA/BNA Lawyers’ Manual on Professional Conduct, Fees, Fee Agreements, §41:101 et seq. The Manual provides a thorough treatment of fee agreement issues and is the place to start in researching fees

The second risk management action is to avoid common billing mistakes. Such as these:

Always bill in a way that is fair, understandable to the client, and consistent with good business practices. The single best billing practice is to bill early and bill often. Whatever billing cycle you are using, stick to it religiously. There are a number of good checklists on smart billing. Automation is key to billing success. Almost all of it is based on good client communications. Howard L. Murdock in his article Better Communication Increases the Likelihood That Bills Will Be Paid emphasizes this point by developing 12 ways lawyers can improve their chances of getting paid by proper billing:

Anthony E. Davis, a highly regarded risk management expert, in his article How to Better Manage the Billing Process*** offers the following advice on how to eliminate billing fraud, avoid fee disputes, and get paid: