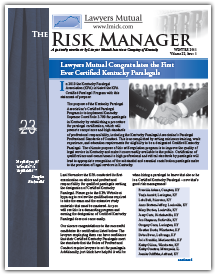 It is bad enough to have to notify a client that you have been negligent in handling his matter, but it compounds the error when that notification includes incorrect information – malpractice upon malpractice. A Georgia lawyer learned this the hard way when he was sued for malpractice and defended by asserting that the statute of limitations barred the malpractice suit. The plaintiff argued that lawyer’s written erroneous representation to her of when the limitation period began to run constituted fraud that tolled the running of the limitation period. (Sowerby v. Doyal, Ga. Ct. App., No. A10A1584, 10/22/10).

The Sowerby case prompts us to offer the following update of previous Lawyers Mutual newsletters and articles* on the risk management considerations when notifying a client of malpractice:

The Georgia lawyer got lucky. The Court found that “Doyal cannot show fraud to overcome the defense that her claim was time-barred because the undisputed evidence showed that she discovered her potential cause of action against Sowerby and the firm within the limitation period. …. Under these circumstances we find no evidence to support Doyal's argument that fraud on the part of Sowerby or the law firm deterred her from bringing her action so as to toll the limitation period.”

You may not be so lucky.