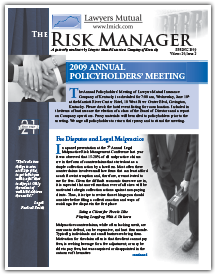 Ohio lawyer O’Brien acted with what he considered extra caution to avoid an ethics violation and still ended up with a six-month stayed suspension from practice for aiding a client in concealing assets from a bankruptcy court.

O’Brien represented Unger in the sale of his residence. The $81,000 proceeds from the sale were deposited in O’Brien’s client trust account. A week later Unger, represented by another lawyer, filed for Chapter 7 bankruptcy. Unger did not reveal the $81,000 to his bankruptcy lawyer and did not include it in the bankruptcy petition.

Shortly after the bankruptcy court discharged Unger’s debts the trustee was informed that O’Brien was holding proceeds from the house sale in his trust account (apparently by a former associate of O’Brien’s firm). This led to the trustee demanding immediate remittance of the funds plus an accounting and documentation of the sale of the residence. This caused O’Brien to once again seek advice about revealing this information and was once again told that it was privileged client information. He refused to comply with the trustee’s demand leading to a series of court orders that finally caused O’Brien to comply.

The Ohio Disciplinary Counsel then charged O’Brien with several violations of the Ohio Disciplinary Rules that ultimately were reduced to a violation of the rule prohibiting the counseling or assisting a client in conduct that the lawyer knows to be illegal or fraudulent. (In Kentucky the rule is SCR 3.130(1.2(d), Scope of Representation.) In ruling on the case the Ohio Supreme Court found:

When asked why he made the disbursements at Unger’s request under these circumstances, respondent stated, “I had no other option but to distribute the money to him.” But respondent also stated that, from his initial knowledge of the existence of the bankruptcy case, he had fully “assumed” that the money in the trust account constituted an asset properly subject to ownership and control by the bankruptcy court and its trustee. As discussed, the board concluded that the house-sale proceeds constituted bankruptcy assets at the filing of the bankruptcy, and we agree with that conclusion.

Only after the bankruptcy trustee discovered the funds and demanded turnover of the money did respondent adopt the different approach of refusing to disburse monies at Unger’s direction.

We agree with the board that respondent, by disbursing money from the client trust account at Unger’s direction, provided active assistance to Unger’s evasion of the bankruptcy laws…. We also agree that respondent’s conduct was not excused by his belief that the attorney-client privilege prohibited him from disclosing the existence of the house-sale proceeds. Quite simply, respondent could have acted with consistency by not disclosing but also not disbursing the funds…. Although respondent rejected this course of action initially, he embraced it after the bankruptcy trustee learned of the house-sale proceeds. (Disciplinary Counsel v. O’Brien, 120 Ohio St.3d 334, 2008-Ohio-6198, 12/4/2008)

The key risk management lesson to take from this case is when you seek advice on an ethics problem be sure to relate all of the ethics issues involved. O’Brien got the advice he needed concerning privileged client information, but never asked for advice about how to treat the funds held for Unger in his trust account. Had he done so he should have been advised that disputed funds in a trust account should not be disbursed until the dispute is resolved. Kentucky lawyers can call the KBA Ethics Hotline (to be followed up with a written request) for an informal opinion when facing a difficult ethics issue like O’Brien’s. A lawyer who complies with the informal opinion will not be subject to discipline “provided the written request clearly, fairly, accurately and completely states such attorney’s contemplated professional act.” These requests are confidential and represent a form of insurance against disciplinary action (See SCR 3.530 for more details about obtaining informal ethics opinions).