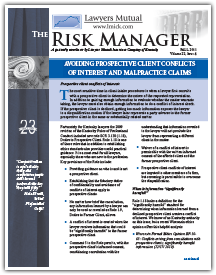 Fortunately for Kentucky lawyers the 2009 revision of the Kentucky Rules of Professional Conduct included new rule SCR 3.130 (1.18) Duties to Prospective Client. Rule 1.18 is one of those rules that in addition to establishing ethics standards also provides useful practical guidance. It is a must read for all lawyers, especially those who are new to the profession. Key provisions of the Rule include:

When is information “significantly harmful?”

Rule 1.18 lacks a definition for the “significantly harmful” standard for determining when information learned from a declined prospective client creates a conflict of interest. We know of no Kentucky authority on this issue, but a recent Wisconsin ethics opinion offers this helpful analysis:

The opinion includes these instructive examples of significantly harmful:

As we have previously advised in this newsletter:
A lawyer’s worst nightmare is to discover that a prospective client the lawyer orally declined did not understand this and believed that he was a client of the lawyer – sometimes reasonably so. Typically, after the statute of limitations has run, the prospective client will inquire about the status of his case. Upon learning that the lawyer has done nothing on it, a malpractice claim soon follows. To avoid this risk always use letters of nonengagement for declined representations that are best sent by certified mail, return receipt requested. Former prospective clients with a complaint or claim never receive nonengagement letters sent by regular mail. A typical letter:

We have also cautioned about the malpractice risk of negligent referral of prospective clients as follows:

Many lawyers do not appreciate that declining a matter and referring a prospective client to another lawyer may result in malpractice liability. This is true even though the referring lawyer receives no fee and has no further participation in the representation. A preliminary consultation with a prospective client is sufficient to create a duty to exercise ordinary care and skill when referring that person to another lawyer. The applicable standard of care is based on the nature of the declined representation.

Often it will be enough to confirm that the recommended lawyer is licensed to practice law in Kentucky. Licensure gives rise to a presumption that the lawyer is competent and possesses the requisite character and fitness. If the declination is because the matter requires special skill or knowledge, the referring lawyer must be careful to ascertain that the suggested lawyer has the necessary competence. If the matter requires immediate action, the referring lawyer should advise that the new lawyer be consulted expeditiously. Recommending the right lawyer without cautioning that prompt action is necessary can also be a negligent referral.