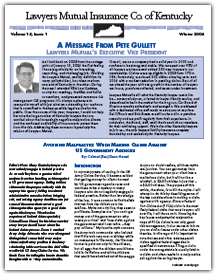 Editor’s Note: Many Kentucky lawyers do not routinely engage in federal practice. As a result they have a greater risk of malpractice when handling a claim against a US government agency. Failing to file a claim under the proper authority with the appropriate agency, failing to exhaust administrative remedies before bringing suit, and missing agency deadlines are just some of the errors that convert a good claim against the agency to a good claim against the lawyer. We asked an experienced federal claims specialist, Colonel Dean Hamel, for his ideas on what every lawyer should know about the federal claims process. Dean is a retired Army Judge Advocate who over a long and distinguished career held every major claims adjudicatory position in the Army culminating in his service as the chief of the worldwide US Army Claims Service. We thank Dean for taking the time to share his thoughts with us – they are invaluable.

Introduction
In my many years of serving in the US Army Claims Service, it became evident that getting money for clients harmed by US government agencies was and continues to be a mystery to many lawyers who do not regularly engage in federal practice. Rather than knowledge of the law, it was common to find beliefs that ran from the ridiculous to the sublime. Myths not only live, they seem to proliferate. Examples are “ you can’t get money out of the government so why waste your time” and “one claim against the government and I can retire – they pay millions.” My favorite myth concerns the Army tank commander who insisted that if his tank runs over a chicken while on maneuvers in Germany, the German farmer is paid not only for the chicken, but all eggs that the chicken would have laid in its lifetime and all the chickens that would have hatched out of those eggs.

As you no doubt realize, all three myths are just that. You can get money from the government when your client has a meritorious claim, but it will not be a windfall. A $2.00 chicken is just that – a $2.00 chicken. The purpose of this article, therefore, is to kill the myths. I will attempt to do this by describing some of the key considerations in making a claim against a US agency. Since a Federal Tort Claims Act (FTCA) claim is the most likely federal claim that most lawyers will ever file, I will focus on it. Knowing the key issues and potential malpractice traps of FTCA claims is not only good risk management, it also serves to inform you on similar issues under other claims theories. In this regard it is important to note that several other statutes permit claims against federal agencies in specified circumstances. Filing a claim under the wrong statute is usually fatal to a claim and often results in a malpractice suit against the erring lawyer.

Legal Basis For Government Tort Liability
We all learned in law school that the government is not inherently liable for its negligent acts. The doctrine of sovereign immunity prevents suit or other action against the government without its permission. In federal cases of damage suffered as a result of tortious acts of federal employees, sovereign immunity is waived by the FTCA (28 USC §§2671-2680). To avoid presenting a claim to the wrong agency or under the wrong authority it is essential to first determine what federal agency employs the tortfeasor. This can be more difficult than you might imagine because of the sheer number of federal agencies. Always contact the legal office of the agency you identify as responsible for the negligent act for verification that it is the correct agency. The agency’s legal office is authorized to provide guidance on how to process a claim and should be cooperative in facilitating the initiation of a claim.

After confirming that you have identified the responsible agency and before filing a claim read the FTCA and any regulations that agency may have published regarding its rules and guidelines for implementing the FTCA. Agency regulations are available in the Code of Federal Regulations. These regulations tend to be very specific and helpful. For example, the Army regulations (AR 27-20, Claims) on the administrative handling of claims under the FTCA are at 32 CFR 536. Agency regulations typically provide detailed information on the procedures for filing a claim, where to file, contacts for obtaining claims information, and some substantive information such as incidents that are not cognizable under the FTCA. See 32 CFR 536.24, 536.25, and 536.50(i) for information on claims not cognizable under the FTCA and claims cognizable under other statutes such as the Maritime Claims Settlement Act. Even if your claim is not against the Army it is recommended that you research AR 27-20. It covers important FTCA substantive law issues as well as other statutory authority for filing a claim against a federal agency. Many other agency regulations are modeled on the Army regulation. The Internet offers easy access to the CFRs making agency claims regulations readily available to all Kentucky lawyers. AR 27-20 is available as well www.usapa.army.mil. Start your research there.

The Elements Of An FTCA Claim
It is well to remember that not every perceived wrong has a remedy. Since the federal government may not be sued without a statutory waiver of sovereign immunity, it follows that any attempt to hold the government liable must comply with the waiver, i.e., the applicable statute. The government is liable under the FTCA only for:

The FTCA waiver is simple enough – only money damages resulting from the negligence of an employee causing the injury acting “in scope.” But as they say – the devil is in the details.

Procedures For Initiating A Claim
The FTCA in authorizing payment for negligent acts establishes specific prerequisites and procedures that must be observed to file a timely claim. The first and most misunderstood is the requirement for filing an administrative claim with the responsible government agency as the first step in the process. You may not go directly to court, state or federal. The administrative claim must be filed within the FTCA two-year statute of limitations. Since many states have a three-year statute of limitations for tort actions, lawyers in those states often carelessly miss the FTCA limitation period. This simply converts the claim from one against the government to one against the lawyer for malpractice.

Although the subject of considerable litigation, the FTCA rule is that the limitations period begins to run when the claimant knew or should have known of the injury. Birth injuries cause the most problems because the injury may not become apparent for many years. The key point is that once the limitations period for filing an administrative claim is missed there are few ways to revive the claim in or out of court.

FTCA claims should be filed with the responsible government agency on standard government form SF 95, although any writing that meets the requirements of the FTCA and the agency regulations will suffice. A properly completed claim form must meet certain requirements:

An SF 95 can be obtained from any federal agency or downloaded from the Internet at a number of websites including www.usapa.army.mil.

The Two Six-Month Rules
The first six-month rule is that once having submitted an administrative claim, you may not file suit in federal district court until the responsible agency has had six months to investigate the claim and to settle or deny it. The agency may also enter negotiations to establish liability or the value of the claim. Six months after filing a claim, a suit may be filed. In many cases, however, the agency needs additional time to investigate, to negotiate, and even in some cases to wait to determine the extent of the injury and what the prognosis for recovery might be. In short, you may not sue for six months after filing a claim. Thereafter, if the claim is still pending, you are not required to file suit, but may do so.

The second six-month rule is more lethal. If the agency determines the claim not to be cognizable under the FTCA, unfounded, or not established by the evidence, the claim will be denied in writing. A written denial triggers a six-month period beginning from time of denial for suit to be filed or the claim is thereafter barred.

Common Errors In Initiating A Claim
I cannot stress too much that the general guidelines in this article are not a substitute for the thorough investigation of the facts and legal research that is necessary to support any successful claim. There are, however, some common errors that can be stressed here to help you avoid disaster in the early stages of the administrative claims process. Lawyers often:

Common Errors In Initiating Suit
Once an administrative claim is denied, or six months has passed since it was filed, suit may be initiated. Once suit is filed in US District Court, the responsibility for the claim passes from the responsible agency to the US Attorney General’s office covering the location where the claim was originally filed. See 28 CFR 14.1-14.11 for the Attorney General’s regulations on defending these suits.

What follows are some of the common mistakes made at this point in the process:

Other Matters Of Interest

Summing Up
The FTCA authorizes the administrative settlement of meritorious claims. Congress appropriates money to pay such claims and urges federal agencies to settle meritorious claims promptly. The level of effort to settle FTCA claims varies from agency to agency, but many like the Army, as a matter of policy, attempt to settle claims expeditiously in a fair manner and avoid litigation. It is my experience that the FTCA is an excellent law that, if followed carefully, provides a simple and effective means of compensating a person injured by the government. An additional advantage is that with an administrative settlement possible, it allows for the favorable resolution of small claims with relatively little investment in time and effort. Finally, it is always important to remember that some claims that appear to fall under the FTCA are cognizable claims only under other statutory authority. AR 27-20 provides general information on many of these statutes – a good place to start your research. It is crucial that you proceed under the proper statute in a timely manner with any federal claim. Much of what you need to know to initiate your client’s federal claim is available to you on the Internet. My hope is that this article will facilitate your research and lead to a fair and equitable result for your client.