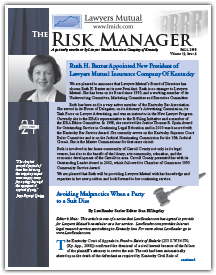 There are an increasing number of case and ethics opinions from other jurisdictions concerning disputes over disbursement of funds and funds held in client trust accounts – perhaps another indication of difficult economic times. In Kentucky the rule is clear that if a dispute arises between lawyer and client over disbursement of client funds, the disputed amount must be left in the client trust account until the dispute is resolved.   See Kentucky Rule of Professional Conduct 1.15 and KBA Ethics Opinion 292 (1985).  These disputes usually concern fees and, if not satisfactorily resolved, often lead to a malpractice claim.

Claims by third parties for funds held in client trust accounts or for improper disbursement of funds present a much more difficult problem for lawyers.  Recent questions considered are:

It is recommended that when in any doubt about your obligation to disburse funds that you call the KBA Ethics Hotline -- that could save you money and avoid a malpractice claim.