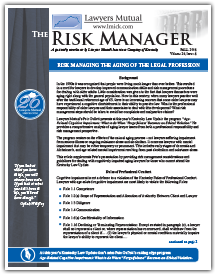 The Internet and social media continue to bombard the legal profession with novel ways to run afoul of ethics rules. Former client reviews of lawyer services on the Internet are accelerating at a rapid rate and many of them are just plain nasty. It is tough after doing what you know was a competent and professional job for a client, even though the results were disappointing, to run into what one commentator calls the “Internet Hate Machine.” Should you just leave the review laying out there for all to see – or should you post a spirited defense? In the absence of Kentucky authority, this article provides an overview of how other jurisdictions are dealing with this issue.

The leading ethics opinion on this question is the Pennsylvania Bar Association Legal Ethics and Professional Responsibility Committee Formal Opinion 2014-200, Lawyer’s Response To Client’s Negative Online Review. This opinion provides a comprehensive consideration of the client confidentiality ethics rule with a good review of opinions from other states. It includes these disciplinary actions to demonstrate how lawyers have gotten in trouble over client confidentiality in their online responses:

The Committee considered whether lawyer responses to social media criticism fit the self-defense exceptions to Rule 1.6 Confidentiality of Information.