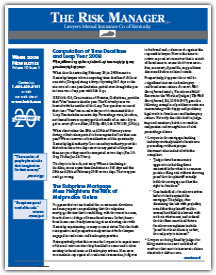 A recent unpublished Kentucky Court of Appeals decision dismissed an appeal from a ruling by an Administrative Law Judge because of the failure of the appellant to clearly state what issues were being appealed. The appellant filed a dozen exceptions to the ALJ's findings, but only in general terms. The following examples show just how general they were:

The Court found this approach to preserving error so disturbing that it went out of its way to raise the issue of non-specific exceptions in appeals.In dismissing the appeal the Court found that these exceptions were of such a general nature that they failed to inform the Court of any specific issues being raised by the appellant and were of little benefit to anyone. In the decision the Court cited other instances when appellants had appeals dismissed over this same issue: “[I]n administrative law cases, a party who disagrees with the hearing officer's recommended order must bring that disagreement to the attention of the agency head or be precluded from raising the issue in court.” Herndon v. Herndon, 139 S.W.3d 822, 825 (Ky. 2004); and Rapier v. Philpot, 130 S.W.3d 560, 563 (Ky. 2004).

The federal courts have likewise required specific facts to be cited in exceptions to ALJ reports. In Howard v. Secretary of Health and Human Services, 932 F.2d 505, 509 (6th Cir. 1991) the Court wrote: “A general objection to the entirety of the magistrate's report has the same effects as would a failure to object.” …. “[O]bjection stating only ‘I object’ preserves no issue for review.” …. “A judge should not have to guess what arguments an objecting party depends on when reviewing a magistrate's report.”

To avoid a claim of malpractice, an appellant filing exceptions to an ALJ’s report should, as in all other appeals, cite specific facts and circumstances within the record that support general claims. The failure to cite the record and identify the specific errors risks a dismissal of the appeal.

reasonable notice of withdrawal, allowing time for retention of another lawyer, and promptly returning papers and property to which the client is entitled. The short time limits on post-trial motions and notices of appeal mandate that the withdrawing lawyer move expeditiously. The client should be urged to retain another lawyer immediately. Avoid the accusation that delay in making a decision to withdraw and complying with withdrawal duties caused the client to miss appeal deadlines.