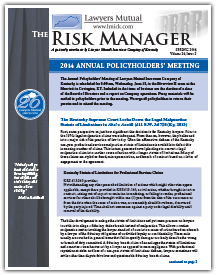 This malpractice suit concerned Pete’s representation of Elizabeth, wife of Michael Anderson who was killed in a van accident. He filed a wrongful death suit on behalf of Elizabeth as personal representative of Michael’s estate, and a loss of consortium claim for Elizabeth. Pete did not file a loss of parental consortium claim on behalf of Anderson’s two minor children. This suit was dismissed because plaintiff’s expert witnesses were excluded from testifying. Two years later the two children filed a malpractice suit against Pete alleging negligence, gross negligence, breach of fiduciary duty, and negligent or fraudulent misrepresentations.

Pete was granted summary judgment based on the argument that he had no attorney-client relationship with the children and that all other claims were barred by the statute of limitations. On appeal the Court of Appeals reversed, ruling that there was a material factual issue in dispute over the existence of an attorney-client relationship with the two children. Furthermore, even if there was none, professional duties were owed the children because they were the intended beneficiaries of the underlying wrongful death suit.

In affirming the Supreme Court addressed the following issues:

Does the Kentucky professional services one-year statute of limitations bar this suit?

The Court had little difficulty deciding it did not citing the provision of KRS 413.245 that “Time shall not commence against a party under legal disability until removal of the disability.” This tolling rule permits the two minor children to bring suit within one year of achieving the age of majority. This suit was, therefore, timely.

Do the children have standing to sue because Pete owed them professional duties?

Elizabeth’s evidence was that she reasonably believed that Pete was representing not only her own interests, but the interests of her minor children as well. She offered an undisputed affidavit that Pete discussed the case with her in terms that “I understood that Defendants were representing me, my children, and my husband’s, Mr. Anderson, estate in the Prior Action.”

In its analysis the Court reviewed long-standing considerations in determining whether an attorney-client relationship is formed:

The contractual relationship between an attorney and client may be “either expressed or implied by the conduct of the parties.”…. Indeed, an attorney-client relationship may be created as a result of a party’s “reasonable belief or expectation,” based on the attorney’s conduct, that the attorney has endeavored to undertake representation. …. Therefore, whether a party had a “reasonable belief or expectation” relating to the attorney’s representation of that party’s legal interests is a question of fact. (citations omitted)

The Court concluded that the reasonableness of Elizabeth’s belief presented a genuine issue of material fact and was not ripe for summary judgment.

Is this a case of client liability, third-party liability, or statutory beneficiaries liability?

In analyzing this aspect of the appeal the Court noted the settled law that a lawyer is liable to the intended beneficiaries of professional services “irrespective of any lack of privity” and observed that with “this principle in mind, we examine the nature of a wrongful death claim in order to determine who is entitled to the benefit of the action, and, in turn, who has standing to sue the attorney for malpractice.”

No Letter of Engagement:

This is yet another malpractice suit with no evidence of a letter of engagement or fee agreement specifying who the lawyer’s client is or the scope of the engagement. Lawyers without client intake procedures that identify all interested parties in a representation are often blindsided by finding that they have clients they did not know they had – resulting almost always in an indefensible malpractice claim as happened in Pete. A carefully crafted letter of engagement clearly indicating who is being represented and the scope of the representation causes lawyers to thoroughly think through any duties assumed for named clients, statutory beneficiaries, and third-parties. Given the current environment when lawyers are seen as deep pockets for any matter gone bad, it is an inexcusable failure of risk management for a firm not to use a comprehensive client intake checklist and detailed letters of engagement – not simply a bare fee agreement.

Pete is recommended professional reading for all Kentucky lawyers. Special emphasis should be placed on the dissents that flag how the decision increases risk for plaintiff lawyers. In particular Justice Noble writes:

I recognize that this decision today places wrongful death attorneys in the difficult position of having to potentially face a malpractice claim many years in the future after young children have gained their majority. The statute requires that a wrongful death action be brought by the personal representative of the estate on behalf of the beneficiaries of the estate. That makes the personal representative the agent of the minor beneficiaries. The only viable argument that the minor children cannot be bound by the acts of their agent is that as minors, they retain their right to file a tort action within one year of reaching their majority without being time barred.

Justice Noble would place the duty on the personal representative “to bring any ancillary claims on behalf of the children in a timely manner, and failure to do so can result in an action being time barred.” She concluded, however, as follows:

But the majority has decided that the risk is better born by the attorney in a wrongful death action, who is held to professional standards and knowledge, than by the personal representative who often is not informed about the matter. I cannot fault the logic of that distribution of risk, although I do regret the potentially chilling effect this has on wrongful death representation.

In Branaham the Supreme Court ruled that a lawyer retained by a minor’s guardian or next friend to pursue a claim on behalf of the minor has an attorney-client xrelationship with the minor. This means the lawyer owes professional duties to the minor who is the real party in interest and can file a malpractice suit.

As a matter of good risk management recognize, that the Pete and Branaham decisions show that the current Supreme Court holds the Bar to enhanced responsibility when a matter involves minors. We offered this risk management advice when we covered Branaham in our Summer 2010 Newsletter (available on Lawyers Mutual’s Website at lmick.com – click on Resources, Subject Index, Minors/Clients with Diminished Capacity, and on the article “Kentucky Supreme Court Expands Malpractice Exposure for Claims by Minors”)

It is hard to miss the point of Branham that when the real party in interest in any action is a minor, lawyers engaged in representing that interest have an attorney- client relationship with the minor with all attendant ethical duties. Accordingly, it is recommended: