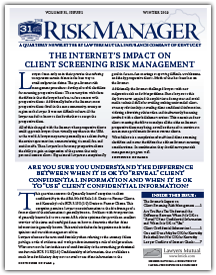 This question concerns the “generally known” exception to client confidentiality in the ABA Model Rule 1.9, Duties to Former Clients, and Kentucky’s rule SCR 3.130 (1.9) Duties to Former Clients.  This exception permits a lawyer to use information to the disadvantage of a former client if the information is generally known.   Problems with interpretation of generally known led to two recent ABA ethics opinions that provide an excellent overview of the issue and useful guidance on how to determine whether client information is generally known.  This article includes the key points made in the opinions and our risk management advice.

Lawyers often use the term confidentiality when referring to the attorney /client privilege, a rule of evidence, and work product immunity, a rule of civil procedure. What must not be lost in this use of confidentiality is the overarching professional conduct rule SCR 3.130(1.6) Confidentiality of information, that establishes a much broader fiduciary duty not to reveal or use client information to the disadvantage of a client unless it is allowed by Rule 1.6 or SCR 3.130(1.9) Duties to former clients.*

ABA Formal Opinion 479, The “Generally Known” Exception to Former-Client Confidentiality (12/15/2017), describes how Rule 1.6 and 1.9 operate to establish a lawyer’s fiduciary duty not to reveal or use client or former client information as follows:

The opinion concluded with this advice:

The opinion describes the risk of revealing confidential information in social media and public commentary as follows: