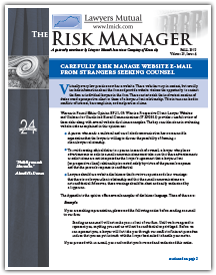 Is There Any Other Authority for LOE Arbitration Clauses?

In KRS 417.050 the Kentucky Legislature authorized arbitration agreements. This, however, does not answer the question because in Kentucky the Supreme Court, not the Legislature, promulgates the rules that govern the practice of law. While not issuing a specific rule on arbitration, the Court in two places in the Rules of Professional Conduct referred to arbitration agreements in a positive context:

(14) Agreements prospectively limiting a lawyer's liability for malpractice are prohibited unless the client is independently represented in making the agreement because they are likely to undermine competent and diligent representation. Also, many clients are unable to evaluate the desirability of making such an agreement before a dispute has arisen, particularly if they are then represented by the lawyer seeking the agreement. This paragraph does not, however, prohibit a lawyer from entering into an agreement with the client to arbitrate legal malpractice claims, provided such agreements are enforceable and the client is fully informed of the scope and effect of the agreement. ….
(emphasis added)

(15) Agreements settling a claim or a potential claim for malpractice are not prohibited by this Rule. Nevertheless, in view of the danger that a lawyer will take unfair advantage of an unrepresented client or former client, the lawyer must first advise such a person in writing of the appropriateness of independent representation in connection with such a settlement. In addition, the lawyer must give the client or former client a reasonable opportunity to find and consult independent counsel.
(emphasis added)

(2) Lawyers often receive funds from which the lawyer's fee will be paid. The lawyer is not required to remit to the client funds that the lawyer reasonably believes represent fees owed. However, a lawyer may not hold funds to coerce a client into accepting the lawyer's contention. The disputed portion of the funds must be kept in a trust account and the lawyer should suggest means for prompt resolution of the dispute, such as arbitration. The undisputed portion of the funds shall be promptly distributed.
(emphasis added)

Based on the foregoing, and subject to further instructions from the Supreme Court, we cautiously conclude that LOE arbitration clauses are authorized in Kentucky.

In the absence of any known Kentucky authority on this question, the recent Louisiana Supreme Court decision, Hodges v. Reasonover (La., No. 2012-CC-0043, 7/2/12) provides a good analysis of the enforceability of arbitration agreements along with minimum disclosures lawyers must make to clients about of the effects of binding arbitration. What follows is a snapshot of the key points of the decision:

“At a minimum, the attorney must disclose the following legal effects of binding arbitration, assuming they are applicable:

“In summary, we find arbitration clauses in attorney-client agreements may be enforceable, provided the contract does not limit the attorney’s substantive liability, is fair and reasonable to the client, and does not impose any undue
procedural barrier to a client seeking relief. However, an attorney must make full and complete disclosure of the potential effects of an arbitration clause ….”

Put Hodges high on your professional reading list. For more on LOE arbitration clauses and lawyer recommended disclosures go to Legal Malpractice, Mallen & Smith, 2012 Ed., §§2:45, 2:46, and 2;47 Alternative Dispute Resolution. If you currently employ arbitration clauses in LOEs, their enforceability may be problematic if the client has not been fully informed of the scope and effect of the agreement as provided in Comment (14) to Rule 1.8 of the Kentucky Rules of Professional Conduct. Risk manage this issue by carefully documenting client disclosures on LOE arbitration clauses.