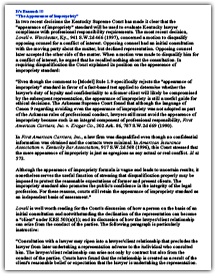 In two recent decisions the Kentucky Supreme Court has made it clear that the "appearance of impropriety" standard will be used to evaluate Kentucky lawyer compliance with professional responsibility requirements. The most recent decision, Lovell v. Winchester, Ky., 941 S.W.2d 466 (1997), concerned a motion to disqualify opposing counsel for a conflict of interest. Opposing counsel had an initial consultation with the moving party about the matter, but declined representation. Opposing counsel later accepted the other side of the matter. When a motion was made to disqualify him for a conflict of interest, he argued that he recalled nothing about the consultation. In requiring disqualification the Court explained its position on the appearance of impropriety standard:

In First American Carriers, Inc., a law firm was disqualified even though no confidential information was obtained and the contacts were minimal. In American Insurance Association v. Kentucky Bar Association, 917 S.W.2d 568 (1996), this Court stressed that the mere appearance of impropriety is just as egregious as any actual or real conflict. Id at 573.

Although the appearance of impropriety formula is vague and leads to uncertain results, it nonetheless serves the useful function of stressing that disqualification properly may be imposed to protect the reasonable expectations of former and present clients. The impropriety standard also promotes the public's confidence in the integrity of the legal profession. For these reasons, courts still retain the appearance of impropriety standard as an independent basis of assessment."

Lovell is well worth reading for the Court's discussion of how a person on the basis of an initial consultation and notwithstanding the declination of the representation can become a "client" under KRE 503(a)(1); and its discussion of how the lawyer/client relationship can arise from the conduct of the parties. The following paragraph is particularly instructive:

Such a belief is based on the conduct of the parties. The key element in making such a determination is whether confidential information has been disclosed to the lawyer."