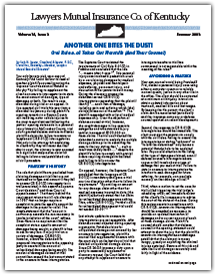 You only have to pick up a copy of Kentucky Trial Court Review to read of another plaintiff’s counsel ignoring the Supreme Court decision of Fratzke vs. Murphy2 by failing to supplement the client’s answers to interrogatories to state the exact amount of damages, type of damages or both. The result is case dismissal during trial or on appeal. In five reported civil trials this year from a dismissal last January during plaintiff’s opening remarks in a Rowan County suit involving motor vehicle injuries to the most recent dismissal following the parties’ opening statements in a personal injury lawsuit in McCracken County, trial courts granted defense motions to dismiss plaintiff’s claims for failure to answer or supplement CR 8.01(2) interrogatories. Not only is the attorney left explaining to clients why they will never see their day in court, the attorney is now exposed to a significant malpractice claim for failing to follow a well-established rule of civil procedure.

Fratzke’s History
The rule that plaintiffs are precluded from claiming damages at trial that are not itemized as to type and amount if they fail to answer CR 8.01(2) interrogatories is well-enunciated in two separate Supreme Court decisions3 and three Court of Appeals cases4. The theory behind the requirement returns to civil rule changes in 1987 that no longer require a complaint to state the specific amount for damages in the prayer for relief. The simple statement that the “amount in controversy exceeds the sum necessary to invoke jurisdiction of the court” suffices. Since there is no requirement that the complaint state a specific amount of damages being sought, a plaintiff is free to ask for any sum in a jury trial on a variety of damages. CR 8.01(2), however, allows the defendant to propound interrogatories to the opposing party to ascertain the amount of unliquidated damages being sought. The amount of damages claimed at trial cannot then exceed the last amount stated in the answers to these interrogatories.

The Supreme Court reviewed the requirements of Civil Rule 8.01(2) in Fratzke and concluded that the rule “... means what it says.”5 This personal injury case involved a pedestrian struck by a car claiming damages for medical expenses, physical and mental pain and suffering, permanent injury, and destruction to her power to earn money. During the discovery process the defendant served CR 8.01(2) interrogatories requesting that the plaintiff identify “... each item of damage, including pain and suffering which [she] claim[s] arises out of the action.”6 The plaintiff responded with a list of medical expenses only. Over the objection of defense counsel at trial, however, she sought damages in five separate categories and was awarded a jury verdict in excess of $123,000 on these claims. The trial court denied the defendant’s motion to exclude the multiple damage claims prior to submitting the case to the jury stating that “... such a result was unduly harsh ....” despite the plaintiff’s failure to comply with pretrial orders requiring damages to be listed and failing to fully answer the CR 8.01(2) interrogatories.

On appeal, however, the Supreme Court concluded that the language of CR 8.01(2) is mandatory and gave a trial court no discretion other than to follow its requirements7. “By omitting an amount for any damage claim other then her medical expenses incurred to date, [the plaintiff] effectively stated that her claim for unliquidated damages was nothing. Thus, under [CR 8.01(2)], Fratzke’s claim for unliquidated damages at trial could not exceed $0.00.”8

Avoiding A Fratzke
How can counsel avoid being Fratzked? First, docket a personal injury case using either a computer system or a reliable manual system, just as in any other file in the office. The client should be contacted at a minimum at thirty-day intervals to obtain updated information about treatment, medical bills and lost wages. By keeping the file current, the client’s claim can be reevaluated periodically and the insurance company or defense counsel updated on recent developments.

Second, the response to CR 8.01(2) interrogatories should be immediate. The client must sign the answers to comply with the civil rules. Failing to answer the interrogatories or stating “unknown” or “to later be determined” only leaves a potential Fratzke hole to be exploited later. Pay careful attention to the listing of the type of damages claimed, even if defense counsel’s interrogatories are vague or fail to ask about a type of damage that you seek at trial. Failure to state in answers to interrogatories the intention to seek damages for future suffering, for example, can preclude recovery on that damage at trial.10

Third, when a motion to set the case for trial is filed triggering the trial judge’s scheduling order, an immediate review of the client’s file is necessary to advise the court of the status of the case. During this review ascertain compliance with CR 8.01(2). Answers to interrogatories should be amended as necessary to provide an updated itemization of damages and a current amount of each of those damage claims. Plaintiff’s counsel should consider that defense counsel in the opening statement could attempt to show the jury that the plaintiff’s answers to interrogatories on damages establish that the claimant is money hungry, greedy or exploiting the minimal injuries sustained. Beware of this risk and state the list of damages accurately and fairly in light of the evidence.

Fourth, the trial brief submitted to the court should outline the factual basis for each damage claim as well as supporting legal authority for the plaintiff’s entitlement to each stated claim. Reference the plaintiff’s most recently updated answers to interrogatories to show awareness of the Fratzke rule.

Finally, docket the plaintiff’s case not less than thirty days prior to the scheduled trial date for one last review of the answers to interrogatories. The courts require that answers to interrogatories be updated seasonably. The Supreme Court has explained that updating answers during the pendency of a trial is not seasonable. Counsel should anticipate the closer an update is to trial the more likely a finding that it is not seasonable.

Conclusion
With knowledge of the Fratzke decision, counsel will be aware of its pitfalls, and the reality that a client’s case will be dismissed at trial or reversed on appeal if there is a failure to comply with the mandatory provisions of CR 8.01(2). Recent reporters, however, indicate that plaintiffs are losing damage claims at an alarming rate because counsel still refuse to believe that the trial courts will enforce the rules. Strict adherence to the requirements of CR 8.01(2) assures plaintiff’s counsel that their clients will be afforded a day in court and that they will not face a malpractice claim for ignoring a critical rule of civil procedure.